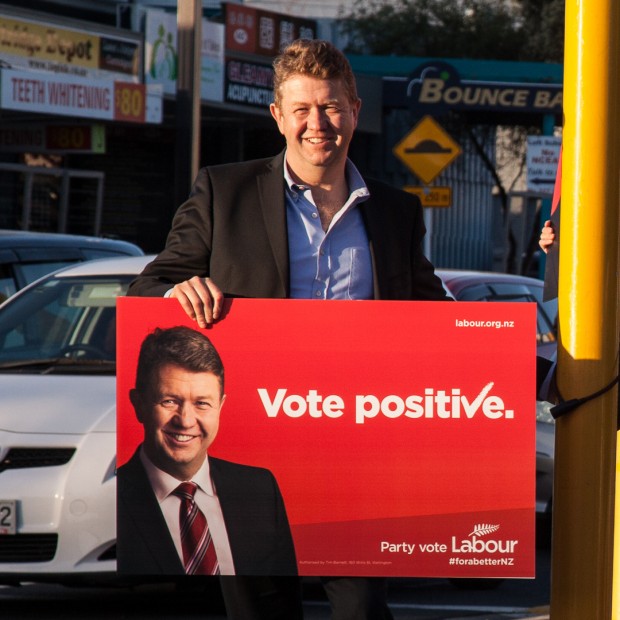 The Herald yesterday did something I have never seen it do before.  It urgently released the results of its latest poll.  It was released at about midday and accompanied by multiple tweets.  My normal impression is that poll results are saved for the morning and the print edition.  It makes you wonder why they went early.  Were they hoping to affect the outcome of the debate?

The headline was that Labour was going backward and National holding steady despite Dirty Politics.

Then this morning’s Stuff Ipsos poll result was released with rather different conclusions.  Labour had made up ground, David Cunliffe’s preferred leadership support had surged, and National and Key had both taken hits from Dirty Politics.

To be frank the polls are all over the place.  The only rule I have when analysing them is that National’s support is probably overstated by 5% and if you distribute this figure around the other parties then it is clear the election is on a knife edge.

I had hoped Labour’s support had increased given what has happened over the past couple of weeks.  But the party has struggled for air time during the Dirty Politics dominated period so softness in its support is not unexpected.  Clearly though its campaign needed a boost.

This is why last night’s debate was so vital and why David Cunliffe’s convincing performance will be causing National deep concern.

John Key tried to downplay the debate from the start.  Claims that he would spend the afternoon shooting hoops with his son were an attempt to provide cover just in case he lost.

The text a vote run by TVone was a joke.  What ordinary person would think about spending money in that way?  I bet the hills of Remuera were ringing with the sounds of texts being sent.

Key was disappointedly light on policy that National intends to introduce in its third term if it wins.  The only new policy I can recall him mentioning is the Kiwisaver bonus.  National really are policy light at the present time.

Some of Key’s claims were strange.  He said that he knows the names of the 80 people who left the country last month.  My two responses would be either how did he get this information or he must be lying.

He also claimed that the country’s books are now back in the black.  My understanding is that this has not yet occurred and in any event requires some dubious accounting regarding the Christchurch rebuild.

And Key’s suggestion there would be tax cuts?  In a show me the money moment Key could not say how much the surplus would be under National in the next couple of years.  Cunliffe knew the figure and said that the only possible tax cut would be the equivalent of a block of cheese a week for an ordinary taxpayer.

Cunliffe was calm, confident and looked prime-ministerial.  Key looked rattled.  I suspect he must be wishing right now that the campaign was over already.

Cunliffe was also the only person to present policy and analysis coherently whereas John Key was negative and did not have a grasp of the detail.

Not that it should matter but the body language was fascinating.  Cunliffe stood tall and dominant and Key looked marginalised.  Also Cunliffe stared ahead and rarely looked at Key whereas Key often glanced nervously towards Cunliffe.

It is the first time I can ever recall John Key being beaten in a debate.  This campaign has just become even more interesting.

Getting back to the Herald, O’Sullivan, Manhire and Armstrong gave the debate to Cunliffe.  Young, daughter of a former National Minister, gave it to Key.  Amongst other media Duncan Garner gave it to Cunliffe, Vance and Watkins called Key “uncharacteristically rattled” and Vernon Small described Cunliffe as being the clear winner.

So we have a good performance by Cunliffe, a pick up in his personal rating and an opponent clearly wounded by the Dirty Politics allegations.  To be honest it is still a David verses Goliath battle.  Cunliffe has only been in the leader’s job for less than 12 months and has had to weather a Jason Ede/Cameron Slater hatchet job on him all year.  Despite all this David Cunliffe may be a sterling campaign away from being the next Prime Minister.