Creepy Key has dodged questions from the Green Party about any contact he may have had with the New Zealand Fox News Herald in the lead-up to Rachel Glucina’s hit job on the cafe worker who’s ponytail he pulled.

The Green Party asked a number of parliamentary questions of the Prime Minister about his, and his office’s contact with Ms Glucina personally, and with Ms Glucina’s PR company Pink PR on April 21, 22 and 23 this year.

“John Key confirmed he had not been in contact with Pink PR but refused to answer questions about his personal contact with Ms Glucina in those days, saying he didn’t disclose his conversations with the media,” Green Party Co- leader Metiria Turei said.

“My question is, did John Key help Ms Glucina stitch up the woman who complained that he’d pulled her hair? And the answer is, John Key won’t rule out he spoke with Glucina around the time of her hit job story.

“Rachel Glucina has boasted about her friendship with John Key, so it’s a legitimate question to ask what contact, if any John Key or his office had with the so-called “gossip queen” before she splashed [the worker’s] identity all over the front page of the New Zealand Herald.

While Creepy Key denied having any contact with Glucina’s PR company, Pink, he answered the the question: “What communication, if any, including, but not limited to, emails, phone calls, letters and text, has the Prime Minister’s office had with the New Zealand Herald on 21, 22 and 23 April 2015?”, with . . .

My office, in particular my media team, is in frequent contact with journalists from the New Zealand Herald, as well as those from Fairfax, TVNZ, TV3, RNZ, Radiolive, Newstalk ZB, etc. It would be unusual for a day to go by without contact as specified in the question. Contact over that time included calls, texts, emails as well as personal contact when members of my media team visited Press Gallery offices. It is not the practice of my media team nor myself to divulge details of the communications we have with journalists . . .

. . . usual fob off with the usual ducking of answering about his own personal involvement.

Also – is Martin Bradbury hinting that there might be another case? 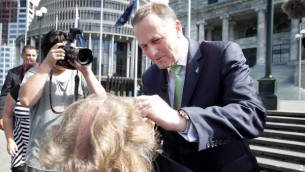 22 comments on “Curiouser and curiouser ”