As expected, Fonterra has dropped the milk solid payout from $7 per kilogram to $6.

The dairy giant announced farm-gate prices sliding to $6 per kilogram of milk solids for the 2014-15 season, after an initial $7 prediction in May.

“The final payout isn’t till this time next year. Twelve months in dairy is a long time,” he said.

O’Sullivan said dairy farming was like any business and there were no guarantees but there was still a fundamental demand for dairy throughout the world.

Hardly unexpected bearing in mind the increased production worldwide and in NZ and the stockpiling that is evident both here and overseas. The NZ Herald has its usual strange headline “Milk cut hits rural folk”. This diminished payout will impact the NZ  economy far wider than just the rural sector, feeding out into the provincial economies and into the cities.

From my view of the market, it is likely that the oversupply in the world traded dairy market will continue to cause the Fonterra payout price to continue to drop over the next years. Certainly the fall shows no signs of diminishing in recent auctions.

As it is, the expected drop in the NZ income will keep reverberating through National’s “rock-star” economy.

The forecast price reduction represents a total drop in payments to farmers of nearly $1.6 billion from Fonterra’s earlier forecast or a cut in farmers’ collective income by roughly $4.3 billion compared with last season’s record pay-out, according to Westpac. 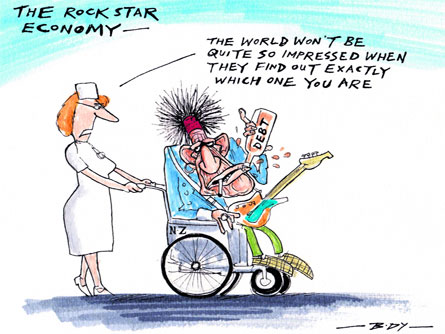 As the cartoon points out, there is a pile of debt both in the rural sector and throughout the rest of the economy based on the high prices from the the sale of whole milk powder based on sales into China.

As I said earlier in the month.

Despite the blithe words of National and some rather silly bank economists. I’d say that the dairy boom is slowing and possibly over.  Expect steadily falling export prices for a number of years.

In the meantime, under National in its usual short term boom mode, much of the rest of our export tech and manufacturing economy has been stagnating. Once you strip the processing of dairy from our manufacturing sector, what you see is the continued decline of capacity. This feeds into the capacity of other areas like IT exports, which in NZ are often exporting hardware with software.

New Zealand needs a different economic approach for a long term sustainable future that doesn’t rely on strip mining soil and water or other resources.

National is clearly incompetent at heading us towards such an alternate economic future. They have been consistently mismanaging the NZ economy in putting far too much emphasis on resource extraction and the systematic degradation of our ability to earn our own way in the world.

Time to get rid of National’s lack of imagination and long-term planning from the direction of our economy.