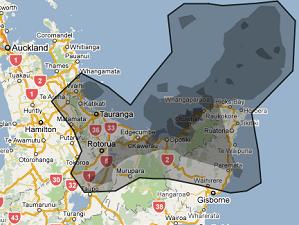 The Deep Horizon oil spill drags on and on and the estimates of the daily leak keep growing. Once, BP claimed that it was leaking 5,000 barrels (750,000 litres) a day. Now, BP is capturing 16,000 barrels a day and tens of thousands more barrels are still leaking into the sea. The gusher is equivalent to a third of New Zealand’s oil consumption (which makes you think what we’re doing to the atmosphere). Yet the government is pushing ahead with deep sea drilling a disturbingly dismissive attitude towards what is happening in the Gulf of Mexico and could happen here.

Announcing the drilling permits for Petrobras to undertake deep sea drilling in the Ruakumara Basin, Energy Minister Gerry Brownlee said, get this, we don’t have to worry about spills happening in New Zealand because they wouldn’t be in the commercial interest of the oil company:

“I’m of the strong view that any of the oil companies who might be interested in pursuing their options will themselves, for the matter of their own liability, want to make sure that they are as safe as they possibly can.”

Well, that’s a touching faith in capitalism. But, Gerry, spills happen. Of course no company wants a spill to happen – it’s a waste of its oil and a clean up cost – but they happen.

A dangerously ignorant statement. BP is not the only company to have ever had a spill. The current spill, contrary to constant misreporting, isn’t even, yet, the largest spill ever to happen in the Gulf of Mexico (the largest happened off Mexico, so no-one remembers it). Petrobras itself had four major spills in 2001 alone.

Hmm, is New Zealand magically protected from the accidents that happen elsewhere? Or have we just not been doing any deep sea drilling on the scale that we’re now looking at? He then casually admits they don’t even plan for a large scale spills:

“the oil spill management system that we have in New Zealand is designed around a much smaller-scale accident [than Deepwater Horizon] it’s not really possible to manage this kind of risk on a day to day basis.”

Isn’t that kind of like the US military saying ‘well, we have safety precautions for our normal weapons but we don’t bother planning for an accidental atomic bomb detonation because it hasn’t happened yet’

“If this kind of event happened here it would be an equally large disaster but New Zealand’s track record is very good.”

That’s like me saying ‘I saw this guy who died in a car crash because he wasn’t wearing a seat-belt but a seat belt has never saved my life so why should I wear one?”

And if we don’t? Isn’t it more sensible to ban drilling until the ways to stop spills are inplace, rather than blindly assume the solution will be there if we need it? New Zealand doesn’t even have drilling regulations specifically for deep sea drilling, only for shallow drilling. The oil companies don’t know how to plug a deep sea spill.

“There have been about 3,000 wells drilled in deepwater and this is the first one to have a serious accident”

And it’s a serious accident that has caused tens of billions of dollars in damage. A 1 in 3,000 chance of an economy-destroying spill? Do you want to roll those dice?

This is not an issue that can be taken lightly. Even the Prestige spill off Spain, which seems small compared to Deepwater Horizon at 500,000 barrels and was 250km from the coast, shut down the local fishing industry for six months.

We can’t afford to take stupid risks like this. And we don’t need to. Our oil isn’t going anywhere. It’s only going to be more valuable in the future. Let’s wait until we can be confident that drilling for it isn’t going to lead to disaster.

Well, accidental disaster. The purpose of getting the oil is to burn it, which is a disaster in itself. The fact is that as oil gets harder to find and demand keeps rising, we’re going to be digging deeper in more extreme conditions and spills will be one of the costs. The best way to avoid oil disasters is to invest in an oil-free economy so we don’t need the stuff in the first place.

19 comments on “Dangerously lax attitude to spills in NZ ”