Darkhorse writes amazingly insightful economic pieces on his ‘How Daft’ blog (the title gives you a clue as to what he thinks of the current state of affairs). The neoliberal experiment has been an abject failure by any rational measure. And there are alternatives. Darkhorse has given us permission to syndicate his posts, the originals are here.

Investment banker Rob Cameron a key player in the lead-up to the Government’s decision to float stakes in State enterprises says the attempts to sell that to the public have been a disaster. Radio NZ
These “assets” aren’t assets they are essential services.  They are fundamental to the growth and dynamism of the economy.  They are owned by the public for good reason and that good reason is that they are monopoly services that need to be run as a single system for the benefit of the whole economy.   These essential services exist to provide the whole economy with electricity.  They do not exist to subsidise or to provide secure shelter for private capital.  If they are to be run to maximise returns to shareholders they will not be run to maximise the benefit to the whole economy.
Mr Cameron says the taskforce recommended the sales as a means to boost the sharemarket to the benefit of investors and capital-starved businesses.
This comment proves how duplicitous Mr. Cameron truly is (or how plain bloody stupid).  If he was a really clever banker this should not be a problem.  How can “capital starved” businesses gain access to more capital through the government absorbing multiple billions of this apparently scarce capital so that it can spend it on activities that should be funded through taxation. 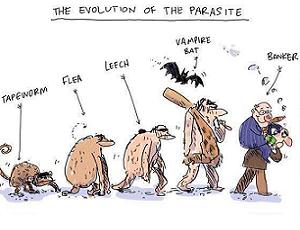 How will the economy grow when it is parasitised by “bankers” like Mr Cameron?
And led by Bankers such as Mr Key.
Mr Cameron is only trying to by seek a subsidy on his investment activity.  If he was a real investment banker he would be looking for real investments in productive enterprises.

This man is self-serving.  It is people like him who have taken us to the bottom of the OECD, to being among the most indebted countries in the world.