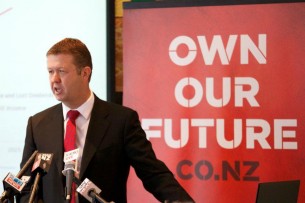 We asked the candidates if they want to post here. So far we have received David Cunliffe’s post.

Firstly, can I thank Lynn and the authors of the Standard for this opportunity to contribute to the dialogue concerning who should be Labour’s next leader. The Standard has become an essential part of political debate in New Zealand and the crowdsourcing of ideas and policies.

I am tribal labour. I am the son of an Anglican Minister known as the “Red Reverend” and a stalwart member of Timaru Labour. My political beliefs were instilled into me from birth. For me the foundation is that every human being is of equal moral worth and the structures of our society must give everyone a chance to be the best that they can be. That means leaning against the free market when it undermines human dignity and starves many of the opportunities they need to build a good life.

Thanks to previous Labour governments I had the benefit of a free and high quality education, attending University, had my course fees paid and even received a living allowance from the state. Holiday jobs in shearing gangs and farm labouring, and a late weekend shift pulling pints, saw me through university without massive debt. Times have changed for the worse for students since then.

By the time I finished my BA (Hons) in political studies at Otago I was already committed to public service. I turned down an offer to work in the Rogernomics-dominated Treasury (for philosophical reasons) instead joining the Ministry of Foreign Affairs. I served in Canberra, ran a regional aid program in the South Pacific for two years, and led the Congressional team at our Embassy at Washington DC from 1990 to 1994.

I then obtained a Masters in Public Administration from the Harvard Kennedy and Business School with the help of a Fulbright Scholarship, and helped teach an International Trade course at Harvard.

I then worked as a business economist and strategy consultant with the Boston Consultancy Group based in Auckland, helping businesses to grow across a dozen industry sectors in Australasia.

I first ran for office in the 1999 election. I won the seat of Titirangi from a sitting National Minister. Since then I have, with a loyal and talented local organisation, been able to convert the seat from a marginally held National seat to a Labour stronghold. In the recent election we held against the tide. The Labour Party vote in my seat decreased slightly but went interestingly to the Green Party. I am pleased that the party vote for National also went down in the area.

The highlights of my contribution in Parliament have included the unbundling of the local loop that broke the Telecom monopoly and my time in Health in dealing with the complexities of handling greater and greater need with constrained resources. I was also heavily involved in work that resulted in rail electrification in Auckland and the construction of a transport hub in New Lynn. I was also pleased to help push through the Waitakere Ranges Heritage Area Act 2008.

I am seeking the leadership of the Labour Party as a team with Nanaia Mahuta. I believe our blend of skills and experiences provide the best opportunity for Labour to address the very real issues this country will face over the next three years.

Nanaia Mahuta is a senior colleague who is known across the whole caucus for her integrity and good judgment. She offers deep insights into Maori society and has a strong network of contacts into Iwi and Iwi organisations as well as an intimate knowledge of post-settlement Maori renaissance. Together I believe that we would model a modern treaty relationship at the highest levels of the Labour Party.

Our team must be ready to lead in a world that will face further severe financial crises and increased environmental instability. With the US in a debt deadlock and the Eurozone on the brink of currency collapse, there has never been a more crucial time for Labour’s leadership to have deep economic expertise and credibility. The twin threats of resource depletion, particularly oil, and continued global warming require brave and informed leadership for New Zealand.

Nanaia and I have indicated that we would intend to run an inclusive caucus and that promotions will be based on ability. As an example I have indicated that if I succeed I will offer David Shearer a front bench seat and will seek to harness his abilities and experiences. In order to build a high performing caucus team we will need good support to enable all colleagues to shine.

Finally it is clear from the recent election result that Labour needs to have a deep look at itself and make changes so that it can form the core of a credible Government in waiting. This will require a new leadership direction and a refreshed Caucus line up. We need to work constructively across the progressive parties to demonstrate to New Zealanders a strong alternative Government in waiting. I believe I can, with Nanaia Mahuta’s help, provide that leadership.

lprent: As a word of warning – I will be moderating and all comments on this post will auto-moderate.

I’m also rather amused that Red Alert now has posts by all of the candidates. Good idea.