When the UN called for a ceasefire in Syria “without delay”, much was made of Russia and Syria continuing military operations against terrorists around Damascus in the area of Eastern Ghouta. Nothing much was said of Erdogan saying that Turkey would not recognise any ceasefire.

The Turkish Army has backed terrorists from various Jihadist groupings (“our” media calls them the FSA), and the Turkish air force has been bombing one of the Autonomous cantons in Syria containing the city of Afrin following the withdrawal of Russia from the area. Now, after two months, the Turkish army and the Jihadists (that “our” media call rebels) have forced the YPG from the city. The YPG are the ‘Peoples Protection Units‘ of the Democratic Federation of Northern Syria (Rojava), and they have fought and defeated ISIS and associated terrorists across the region these past years.

And now the terrorists are back. With Turkey’s backing.

I’m not going to pretend I can unravel all of what’s happening.

Apparently, the Syrian Army facilitated the safe passage of people from Afrin, but wouldn’t allow arms or weaponry along the only open corridor – from Aleppo to Afrin. (Cockburn in The Independent) 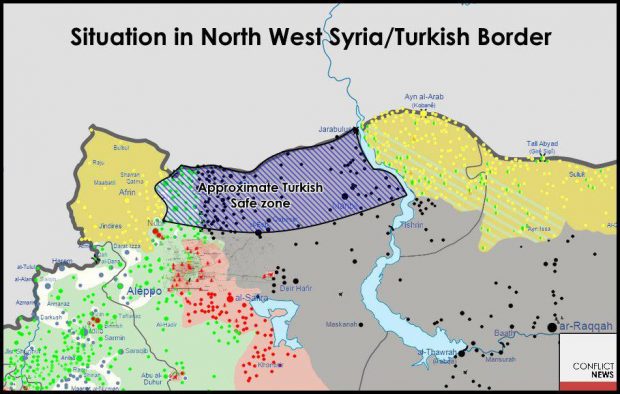 So Afrin, somewhat isolated from the rest of Rojava, has fallen to Jihadists, and we can no doubt expect similar atrocities to those that have occurred in other towns and cities temporarily captured by the various terrorist groupings. We can also expect “our” media to be fairly silent and continue to refer to Jihadists and terrorists as the Free Syrian Army and rebels, when it suits western anti-Syrian and anti Russian narratives. What we can’t expect is anything very much about how genuine grassroots democracy, that had organised against ISIS et al has just been crushed.

As for the rest of Rojava well, who knows? The US has a military presence that may deter fellow NATO state Turkey from razing the entire region in order to install its preferred governance structures. Or the US may up sticks and leave. (Neither the US nor Turkey’s presence within the borders of Syria has any legal standing in international law.)

The Syrian Arab Army may finish operations in Eastern Ghouta and head north to confront Turkey’s invasion. Russia may step up to the plate in the region again. Or the partition of Syria might occur off the back of a jagged stalemate in the north of the country.

But whatever happens (and I don’t expect it to be anything good) the development of genuine democracy that was being attempted by the people of the region –  who come from various ethnic and religious roots – is probably coming to an end. (Here’s a fairly comprehensive reading list on Rojava.)

And the silence of “our” media and of “our” elected representatives on the end of a nascent flourishing of substantive and empowering democratic forms of governance is no less sickening for being expected. The parallels with Spain are painfully obvious. Turkey has assumed the role of Hitler’s Germany and, like Hitler’s Germany, gets to enjoy the appeasement by all the western Liberal Democratic governments as it crushes democracy underfoot. 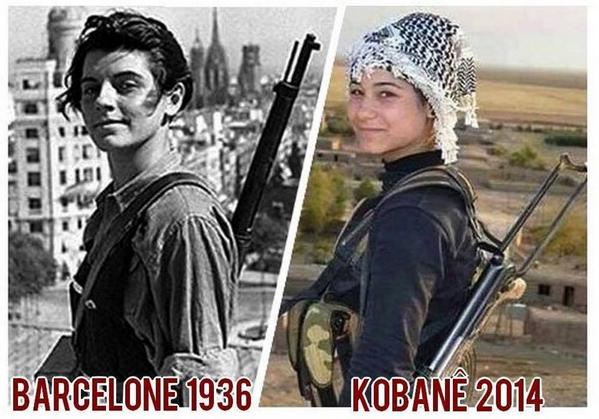