Desperation from the Herald 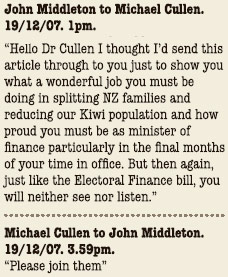 Yesterday’s supposed scandal over an email exhange between Michael Cullen and a National Party activist was an absurd piece of political activism from the Herald.

Recently the paper has been running almost daily attack articles on the government, but this was surely scraping the bottom of the barrel. Nat activist John Middleton was painted as a concerned citizen who just “wants to see the country go in the right direction”, while his email consisted of little more than childish abuse that was apparently on the topic of New Zealanders moving to Australia, but seemed to encompass a range of grievances including the Electoral Finance Act, families being split up and his desire to see Labour removed from Government.

Cullen, with remarkable wit and restraint, simply responded “Please join them” and left it at that. Clearly it wasn’t the wisest political move on his part to engage with people like Middleton, but it’s certainly not scandalous in any way and nor is it newsworthy. The article became even more ridiculous when it quoted Bill English breathlessly suggesting the exchange (which chances are he passed on to the Herald himself) was evidence Cullen had just “given up caring”.

That the Herald’s editors considered this desperate non-story worthy enough to lead the National News section of their website for most of yesterday says a lot about their warped news judgment. Is it any wonder no one takes the Herald’s political reporting seriously any more?

Dr Cullen is unrepentant: “Rude writers can expect that kind of response,” he said. And who can blame him?

What did the writer expect? It’s bit rich sneering at someone then complaining when he replies in kind.

31 comments on “Desperation from the Herald ”