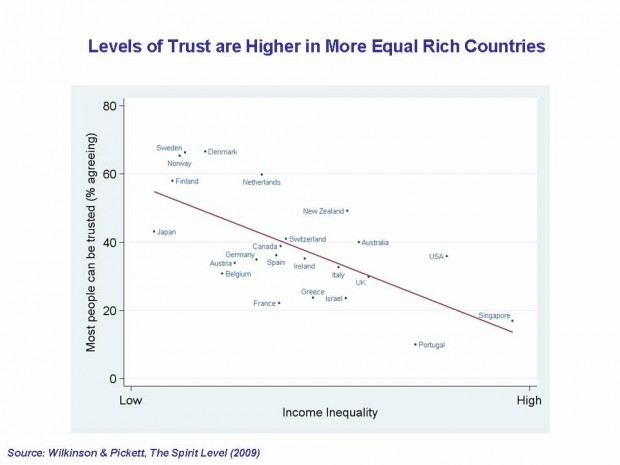 In Sweden 66% of people trust strangers; in Portugal it’s just 10%.  Anecdotally we see in Norway blankets left outside cafes in case people are chilly, with no worries about theft; in the US we saw black people too scared of crime to leave their houses ahead of Hurricane Katrina and subsequently losing their lives.  But why this marked contrast between wealthy western societies?

Inequality is a powerful social divider – we tend to use living standards as markers of status.  Then we tend to make friends from our near equals, and have little to do with those richer and poorer than us.  Before long we’re justifying discrimination against various groups because ‘they just don’t live like us’.  Noticeably less equal countries also buy more SUVs and give less foreign aid – we have less empathy with those we don’t see as equals, and material wealth has divided us socially.

The US saw a marked decrease in trust over the 1960s to the 1990s, in a close correlation to its increase in inequality over those decades.  Eric Uslaner, a political scientist at the University of Maryland, statistically shows the causality between the two is that inequality affects trust – ‘trust cannot thrive in an unequal world’. 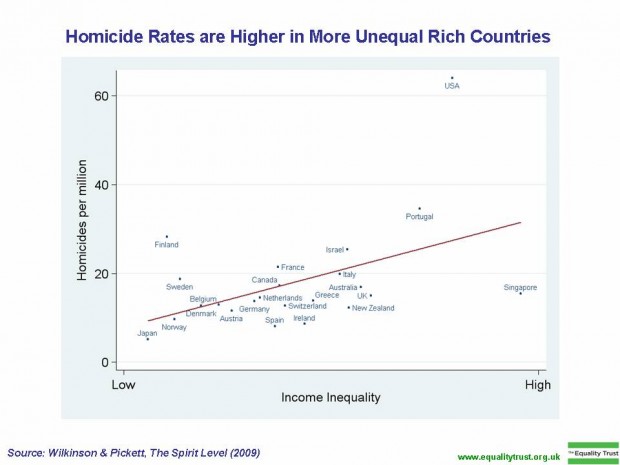 There is unfortunately only one crime that is truly comparable between countries, with their different laws, different reporting rates and different legal systems.  And homicide quite clearly shows a strong link with inequality, with the USA having a murder rate of more than 12 times that of Japan.

Rates of conflict experienced by children from their peers also have a strong correlation to inequality.  But why is violence so closely linked?

It comes back to status.  In unequal societies status matters far more as the stakes are higher.  There is a sexual element to this too – for women looks are important, but for men status, particularly financial, is valued.  And young men near the bottom of the heap have very little status to defend – if they lose their job, their girlfriend, or are slighted in any way outbursts of violence are often their only to try and keep what status they can. 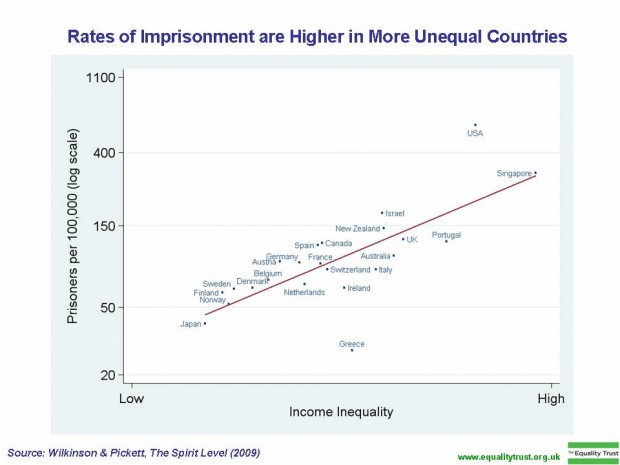 The US in 1978 had 450,000 prisoners; in 2005 there were over 2 million.  In the UK the prison population has more than doubled since 1990.  At the same time the number in prison has been stable in Sweden and declined in Finland, Ireland, Austria, France and Germany.

There is little correlation to the change in crime rate to the change in prison population, so clearly some societies are getting more punitive than others.  Specifically the US prisoner increase is 12% due to increasing (largely drug-related) crime, 88% is from harsher sentencing.  In California due to 3-strikes legislation 360 people are serving life sentences for shop-lifting.  In the UK 40 prison sentences for shop-lifting are handed out each day as the imprisonment rate moves in the opposite direction to the crime rate.

The US has 576 in prison for every 100,000 of their citizens; in Japan they have just 40.  The rate is far worse for black people in the US who are 6 times more likely to be jailed (over 13 times in New Jersey) – despite only a slightly higher violent crime rate, a similar property crime rate and a lower drug crime rate.  White people are far more likely to be offered diversion and black people more likely to get heavier sentences.  With over 50% of our prison population Maori, one wonders if there’s a similar story here.

This has got too long to talk about bonobos and chimps and our social inheritance, so you’ll have to read the book (but I’d choose the sex and compromise of the bonobo over the violence and hierarchy of the chimp any day – and fortunately the vital bit of our brain agrees).  There are interesting bits about brain chemicals linked to trust and fairness and neurons which mirror what we see, giving us empathy but also the ability to learn violence as well as love.

Next up: Other social problems.