Education is the future – it will be what creates or destroys the success of our society when the next generation has its turn to lead.  So what produces the best outcomes?  Good teachers in innovative classrooms, to be sure; but much more than that parental support.  Parents with higher incomes and more education themselves have children who do better – but direct parental involvement is even more important.  In turn children who do better at school will not just earn more, they will be more satisfied with their jobs, are far less likely to end up in prison, and more likely to be healthy and vote.  How do we get this outcome for more of our children? 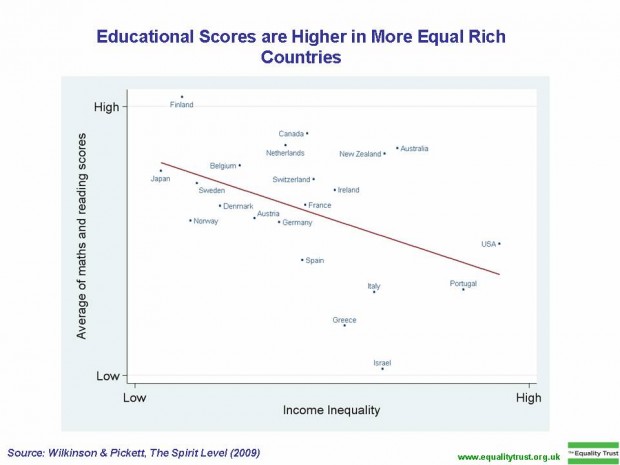 Although New Zealand does quite well at education, in general more equal societies do better.  And they do better across the board.  New Zealand and the UK’s reading scores are very high for a few who pull the average up – Scandinavian countries are much more consistent.  Indeed in some research there’s a suspicion of under-representation of lower socio-economic groups in NZ and UK helping raise the average.

There are good reasons for more equal societies doing better.  Parents will do better with more support – and more equal societies tend to provide that.  Maternity leave is just the most obvious example: in the US & Australia there is no paid maternity leave at all, and in the US a woman may take only 12 weeks unpaid.  In Sweden 18 months of parental leave at 80% of salary may be taken by either parent (or split between them).

And the results of that support and the difference in income can be stark: a UK study showed that 3 year-olds from disadvantaged homes were already 1 year behind in their development compared to those from privileged households.

The psychological effects matter too – in blind studies lower socio-economic children do better (and the wealthy worse), than in studies where status is made clear before children take the tests.  Also interesting from a psychological point of view: although their educational results were better than less equal countries, more 15 year-olds aspire to less skilled work in more equal countries (eg 50% in Japan vs 15% in the US).  The result being that those who cannot achieve university education are much happier with their lot as those jobs are not so stigmatised. 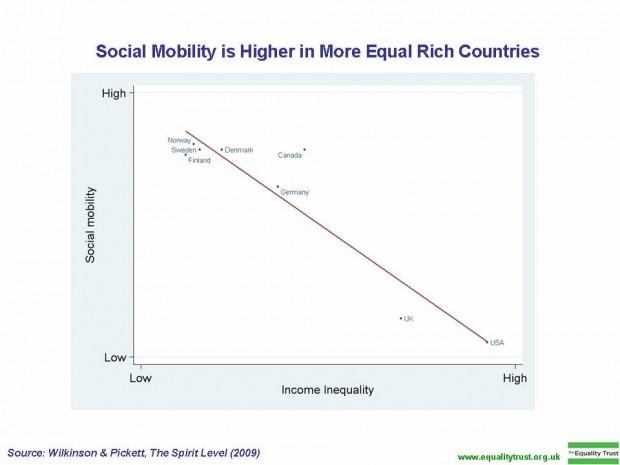 The American Dream says that anyone can grow up to do anything.  But in fact social mobility is incredibly low in the US – if your father wasn’t wealthy, it’s highly unlikely you will be.

The number of countries with data here is low, which leads us to be cautious; but there has also been a large decrease in social mobility in the UK and US since 1980 – the same period that inequality has massively increased in those countries.

So far from inequality creating ‘incentives’ for people to move up, it instead creates sinkholes from which they cannot climb out.

The main driver of social mobility seems to be education – the connection to inequality of that is seen above – and in particular, publicly-funded education.  The level of public-funding of education is in turn tightly correlated to inequality.

Another result of inequality and lack of social mobility has been that those ‘sinkholes’ have become geographical.  As the wealthy move into gated communities, the poor end up left in ghettoes.  And those economically disadvantaged end up doubly so when they are surrounded by people in the same boat.  With the whole community lacking in resources, schools suffer, education outcomes suffer and social immobility is further enforced.  Crime and violence are often left as the only way forward. 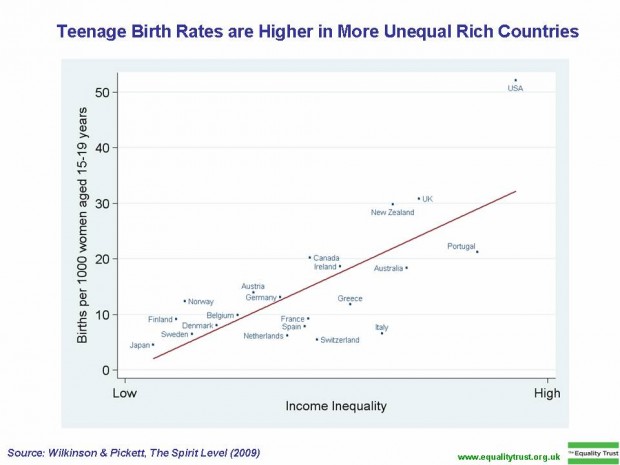 I mentioned the strong link over time for teen pregnancy rates vs inequality in the US in my previous post, but here’s the graph for between countries.  It’s teen pregnancy births which is slightly affected by abortion rates, but a similar graph of the US states for conceptions shows a roughly parallel correlation.  Indeed the biggest difference between conceptions and abortions is for the wealthier half of society – they are far more likely to abort and keep their own future prospects improved, where the poor are likely not to expect any good prospects anyway.

Even within the statistics hides a worse picture for unequal countries: in Japan, Italy and Greece, more than half of the teen pregnancies are within marriage (86% in Japan), where in NZ, US and UK that figure is less than a quarter.  Another interesting statistic is that overall birth rates appear unaffected by inequality – suggesting fewer older mums to balance out the greater number of younger ones.

So why do less equal societies have more unmarried young mums – ‘babies having babies’?  Like the young male violence it seems this is the only way these young women know how to gain status and adulthood.  In turn they likely ruin both their own life chances (of education, work, social mobility, wealth…) and their children’s – those born to a teenage mother are much more likely to become one.

Absent fathers have a large part to play as well.  Girls who grow up without a father are much more likely to become a teenage mother.  But those young fathers from deprived backgrounds are unlikely to be able to offer much stability, income or support – and they have their own battles with inequality to occupy them.  So the young mums console themselves with a strong relationship with their baby – their best chance of intimacy in their chaotic lives.