Danyl at Dim-Post hit the nail on the head with this classic image and post last week: 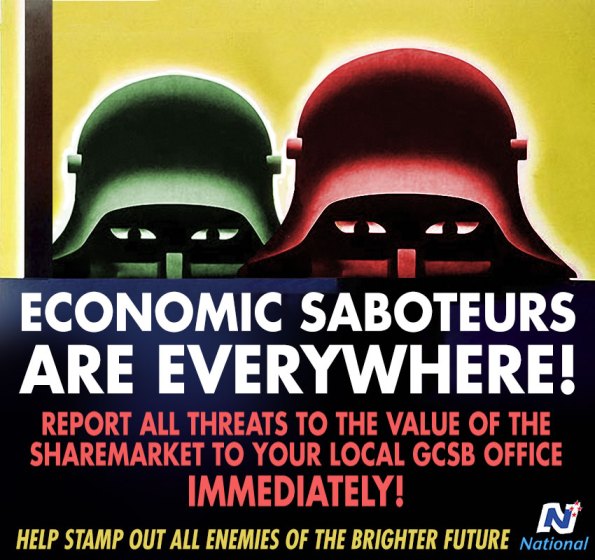 Back in 2007 the Labour Party introduced the Electoral Finance Act, the main effect of which prevented organisations that weren’t registered political parties from spending more than  $120, 000 during an election year (it was a response to the Exclusive Bretheren’s multi-million dollar stealth campaign in 2005).

The New Zealand Herald went ballistic and ran a months-long campaign against the legislation, printing the banner ‘Democracy under attack’ across their front page and publishing literally hundreds of stories and columns and editorials attacking the legislation.

Flash forward six years: a National government has introduced legislation that radically reforms the state’s intelligence apparatus, allowing the GCSB to monitor anything in New Zealand that goes by the name of an ‘information infrastructure’. The bill is in response to revelations that the GCSB has been illegally spying on New Zealanders; it gives them sweeping powers to intercept domestic communications with virtually no oversight, rushed through Parliament under urgency, naturally.

It’s early days, but so far the Herald coverage is three stories and this editorial, which concludes:

New Zealand First, as a condition for supporting the legislation, wants every warrant to be reviewed within three weeks by an independent authority selected from the judiciary, the Defence Force and the police. This, it says, would give the public confidence they are not being unfairly spied upon. It is right. A little tinkering along these lines would help smooth the passage of what should be largely uncontroversial changes.

It’s also interesting to compare this mild response to the reaction against the Labour-Green power policy announced a couple of weeks ago. The Herald’s editorial went nuts, as did business editor Liam Dann, as did Fran O’Sullivan, attacking the policy as ‘the ghost of Hugo Chavez’. Fairfax journalist Colin Espiner insisted Labour had ‘literally gone insane‘. A impressively huge propaganda machine swung into action: Business New Zealand, energy company CEOs, fund managers, merchant bankers all came out fighting in a nicely staggered sequence of denunciations.  …

Go read the whole article for more. Perhaps Danyl won’t mind me ripping off his content if I also put in a plug for his (first) book, it is available here from July. I’ll be buying a copy – hope you will too. 4 comments on “Dim-Post on two comparisons ”