The New York Times has an article about a continuing trend in technology. That of discrete stand alone solar and bio power – “African Huts Far From the Grid Glow With Renewable Power”. This article is focused on the use where existing networks don’t exist. However the same type of technology is likely to become more widespread even in the developed nations.

That wearying routine ended in February when the family sold some animals to buy a small Chinese-made solar power system for about $80. Now balanced precariously atop their tin roof, a lone solar panel provides enough electricity to charge the phone and run four bright overhead lights with switches.

The significiant element in this statement is the way that China has been directly supporting via state intervention, and therefore driving down the cost of production of solar technology, making these technologies available at acceptable prices. In the New York Times summary on solar power:-

China has leapfrogged the West to emerge as the world’s largest manufacturer of solar panels. China’s efforts to dominate renewable energy technologies raise the prospect that the West may someday trade its dependence on oil from the Mideast for a reliance on solar panels, wind turbines and other gear manufactured in China.

In the United States, power companies frequently face a choice between buying renewable energy equipment or continuing to operate fossil-fuel-fired power plants that have already been built and paid for. In China, power companies have to buy lots of new equipment anyway, and alternative energy is increasingly priced competitively.

But China’s commitment to renewable energy is expensive. Although costs are falling steeply through mass production, solar power is still at least twice as expensive as coal.

But as the companies finally begin mass production — Solyndra just flipped the switch on a $733 million factory here last month — they are finding that the economics of the industry have already been transformed, by the Chinese. Chinese manufacturers, heavily subsidized by their own government and relying on vast economies of scale, have helped send the price of conventional solar panels plunging and grabbed market share far more quickly than anyone anticipated.

As a result, the California companies, once so confident that they could outmaneuver the competition, are scrambling to retool their strategies and find niches in which they can thrive.

But in the end, the world needs cheaper discrete solar power systems in the developing world and lower cost network generators in the developed world as a viable alternative to hydrocarbon based generation. 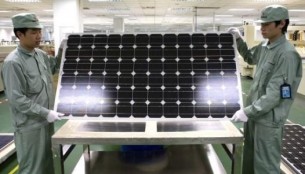 The Chinese are providing these sooner rather than later by pushing the available technologies into mass production, usually in joint ventures with the developers (usually from the US). The supports are close to the bounds of the WTO rules, and at some point I’d anticipate a WTO challenge of the Chinese support. But even if it was to succeed, the worldwide demand for cheap implementations of these technologies is such that costs of tariffs is more likely to harm the economies that put them in place after a WTO decision than it is likely to harm the Chinese.

In the meantime, the low installation costs are probably going to help the developing world more than any other initiative of the last half-century. Especially in the way that it supports the already widespread mobile communications technology infrastructure.