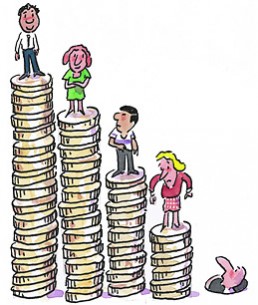 Susie Fergusson introduces the interview stating that Bill English told the House this week that the “average wage” has increased by approximately $3,000 over the last two years.  It is now about $55,000. English also continues the mislead, by predicting continuing future rises.

Wagstaff says that far too many people are earning less than the living wage and too many are on the minimum.  The public sector The Human Resources Capability in State Services Report that came out last week,

“To deliver quality public services, New Zealand needs to attract the best people to our public service, and pay is a significant factor in this.

Earlier in the year, Bill English had made it clear that people working for the state couldn’t expect the same pay rises as in the private sector.

Wagstaff thinks we are seeing the rich get richer, and the poor get poorer, with a lot of people in the state sector on low wages and wages that “aren’t moving”.  Wagstaff is concerned that Engish is not representing people’s experiences, while also raising their expectations about getting wage rises in the future.  This creates the conditions for future industrial disputes.

Meanwhile, the top bosses in the state services are raking in the money. RNZ reports:

Sutton has recently resigned from being the boss of the Canterbury Earthquake Recovery Authority.

It revealed the highest-paid public servant was New Zealand Superannuation Fund chief executive Adrian Orr, who earned more than $800,000 a year – boosted by a $130,000 pay rise.

The average increase in base salary for public service chief executives was 2.8 percent; recent collective bargaining outcomes in the public service have ranged between 2.6 and 3 percent.

The inequality gap is not best measured by average ages.  It is more telling to look at the top and bottom 10% of incomes.

Wealth – meaning accumulated assets, rather than just annual income – is even more unevenly distributed. The top 1 per cent of adults own three times as much of the country’s wealth as the entire lower half put together.

The CTU shows the inequalities’ gap in a  telling graph on a pdf file.

Neville Bennett on Interest.co.nz, gives some more telling details of income and wealth inequalities in NZ.

He highlights the hard edge of the inequality gap for those categorised as living in “hardship”:

Hardship is defined by a specific set of deprivations, in which the household is forced to forego goods that are considered required for a basic or minimal acceptable lifestyle.

Bennettt also identifies inadequate housing, and resulting ill health as a consequence of living in hardship.  It also results in, “missed educational opportunities, and depression”, loss of skills, a rise in anxiety, and stress, and has an impact on crime.

In short, inequalities are bad for society as a whole.

These are the appalling facts that John Key and Bill English are trying to hide with their misleading rhetoric about “average wage rises”.

16 comments on “‘Ditch the [misleading] rhetoric’ ”