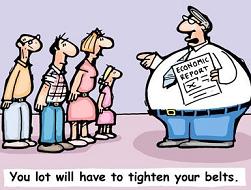 What gets me is the entitlement mentality from these senior members of Key’s government. Exactly the same mentality they claim afflicts ‘bludgers’ who get benefits and public servants. Their only response is ‘I’m entitled. I’m not breaking the rules’

English won’t even dip into his $276,700 salary to pay for his own family home. If you live in Wellington, you can’t claim the Wellington allowance. English keeps up the fiction that he’s based out of Wellington to rort the system for another $50K (when was the last time English lived out of Wellington? He was a Treasury analyst before entering Parliament).

English enjoys playing the angel of death. Darkly threatening the public service demanding they do more with less. Threatening further, deeper cuts. ‘Got to cut back’ he says. ‘Tough times, no free rides’. Meanwhile, Bludger Bill’s bleeding the taxpayer for all he can himself.