Do we feel lucky?

I wouldn’t usually write on the same topic two days in a row, but – can’t help myself. Yesterday I posted this piece from Bill McKibben:

Try to fit these facts together:

* According to the National Oceanic and Atmospheric Administration, the planet has just come through the warmest decade, the warmest 12 months, the warmest six months, and the warmest April, May, and June on record.

* A “staggering” new study from Canadian researchers has shown that warmer seawater has reduced phytoplankton, the base of the marine food chain, by 40% since 1950.

And then, in late July, the U.S. Senate decided to do exactly nothing about climate change. They didn’t do less than they could have — they did nothing, preserving a perfect two-decade bipartisan record of no action. Senate majority leader Harry Reid decided not even to schedule a vote on legislation that would have capped carbon emissions. …

Today, a perfectly matching volume to add to our copious library of stupidity:

BONN, Germany Global climate talks appear to have slipped backward after five days of negotiations in Bonn, the chief U.S. delegate said Friday, adding that some countries were reneging on promises they made last year to cut greenhouse gas emissions.

Poor countries agreed with the grim assessment made by U.S. negotiator Jonathan Pershing, saying that latest round of talks on how to fight global warming have been frustrating.

The sharp divide between rich and poor nations over how best to fight climate change â€” a clash that torpedoed a summit in Copenhagen last December â€” remains, and bodes ill for any deal at the next climate convention in Cancun, Mexico, which begins in November.

Gotta ask the question. Do we as a species actually have the will to save ourselves? Do we care? Because we know this story ends:

The world is now firmly on course for the worst-case scenario in terms of climate change, with average global temperatures rising by up to 6C by the end of the century, leading scientists said yesterday. Such a rise which would be much higher nearer the poles would have cataclysmic and irreversible consequences for the Earth, making large parts of the planet uninhabitable and threatening the basis of human civilisation.

We are headed for it, the scientists said, because the carbon dioxide emissions from industry, transport and deforestation which are responsible for warming the atmosphere have increased dramatically since 2002, in a way which no one anticipated, and are now running at treble the annual rate of the 1990s. Although the 6C rise and its potential disastrous effects have been speculated upon before, this is the first time that scientists have said that society is now on a path to meet it. … 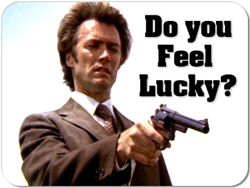 Just how dangerous was signalled in 2007 by the science writer Mark Lynas, who combed all the available scientific research to construct a picture of a world with [a 6° increase]. He said: ‘It would cause a mass extinction of almost all life and probably reduce humanity to a few struggling groups of embattled survivors clinging to life near the poles.’

Very few species could adapt in time to the abruptness of the transition, he suggested. ‘With the tropics too hot to grow crops, and the sub-tropics too dry, billions of people would find themselves in areas of the planet which are essentially uninhabitable. This would probably even include southern Europe, as the Sahara desert crosses the Mediterranean. ‘As the ice-caps melt, hundreds of millions will also be forced to move inland due to rapidly-rising seas. As world food supplies crash, the higher mid-latitude and sub-polar regions would become fiercely-contested refuges.

It’s slower than Clint Eastwood with a .44 magnum, but the end result will be the same. Do we feel lucky? Do we?