Does anyone care about the gender wage gap? 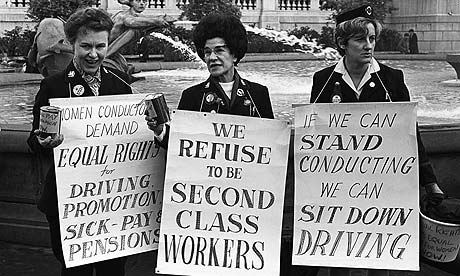 How it was
The Guardian writes that forty years ago, a group of women sewing machinists at the Ford Motor Company plant in Dagenham saw red. They discovered that men who were doing the same work as them – making the car seats for Cortinas and Zephyrs – were being paid 15 per cent more.

Where we’re at now
The latest Statistics NZ analysis of 2006 Census education and training data has confirmed the pay gap between men and women still exists, with the median personal income of men higher than that of women at all levels of education. The Herald reported:

Women in Technology founder Carol Lee Andersen told the Herald she heard of the pay differential often but believed it was getting better. A director of three human resources companies, she said men tended to be better than women at negotiating conditions.

“We are trying to educate people on being really clear about what they are asking for and, when they go to reviews, be prepared,” she said.

So because women aren’t as confident/prepared/stroppy they get a dent in their pay packet? I know there will be those who say it’s about individuals’ performance, that talking about gender inequality is past its use-by date. But this presentation [caution, linked PowerPoint] by EEO Commissioner Judy McGregor (May 2008) is a clear indication that there is an issue to address.

There are only three women in the top 50 police officers (by rank), 60 of the top 100 companies (NZSX) have no women on their boards, and there are only a few women partners in top law firms (now 16.8%).

Why would you care? Surely it’s just a matter of them doing the work, what it takes to get the job? Well I think it does matter. Not only do I want my daughters to be able to embrace opportunity and not have it predetermined by their gender, I want our world to benefit from including the experiences and perspectives of the female half of the population. Call me an idealist – but I want whichever parties make up the next government to care as well. So bring on the policy – and not just a one pager full of white space!

38 comments on “Does anyone care about the gender wage gap? ”