Doing nothin’: The gap with Australia

September Quarter unemployment numbers are out today. It will be an indictment on National if there is not a good sized drop. So how is this government doing on its flagship policy of closing the gap with Australia by 2025? No Right Turn has been trying to find out what work they’re doing to achieve that goal. Answer: Nothing.

Back in August, Labour spent a lot of time trying to get a straight answer from Gerry Brownlee about the milestones and targets the government had set to show it was on the path to closing the gap by 2025. Finally Brownlee gave this answer:

It is my view that if we are successful in achieving these targets, we will achieve the Government’s milestone of achieving income parity with Australia by 2025.

I/S at No Right Turn points out the obvious: those aren’t targets or milestones, they’re vague statements of National’s economic policy. I/S didn’t think that answer was good enough from a senior minister of the Crown describing his government’s core policy. Like the terrier he is, he keep digging. He OIA-ed the documents that laid out the supposed targets and milestones Brownlee had refered to.

Eventually, the government handed over a Cabinet paper. I/S explains:

It makes no mention of Brownlee’s “targets”, or indeed of any interim targets or milestones at all. Instead, its full of the usual bureacratese, recommending that Ministers take “a targeted and structured approach” to economic growth and inviting them to consider actions in their portfolios which could be the subject of further papers. A lot of wheel-spinning, but no formal targets or milestones.

Attached to that Cabinet Paper was a powerpoint presentation to the Cabinet Strategy Committee, Achieving New Zealand’s Economic Potential: Exploiting International Opportunities by Harnessing our Strengths (15 September 2009). It likewise does not contain any targets or milestones. But it does contain lots of information on the sorts of things which should be targets. For example, it notes that NZ’s GDP per-capita growth rate must be 1.5% higher than Australia’s on average over the next 15 years if we are to close the gap. The Government has already admitted that it does not expect to meet that target for the next five years. Real exports/capita needs to grow 2.2% faster than their historic average of 3.1%. There’s no sign of that happening. Exports need to grow to $150 billion. But even the government’s “stretch” targets show them coming to only $116 billion or $137 billion if we discover oil (which seems to be their plan, BTW: “discover oil”). And that is why the government will not publish proper benchmarks: because by any assessment, their grand project would be judged a failure, an impossible dream.

Yesterday, I/S reported he had been contacted by a government source who said:

I can confirm that during the period you are referring to – roughly speaking, the winter and fall of 2009 – there was no discussion of or advice given on targets for closing the income gap with Australia. The 15 Sept Cabinet paper, which details the growth paths of GDP and exports needed to achieve the Government’s goals, is the closest thing that exists. In short, Minister Brownlee did not ask for advice on specific targets or milestones.

If it’s not clear by now, let me put it plainly: the Government has done no work at all on achieving its stated target of catching Australia within 15 years. They are lying to Parliament and to us when they claim to have any targets or milestones for getting there.

But what if it did have a target that would actually get us there? What if it was to grow the economy 1.5% per capita per year faster than Australia? How are they doing? 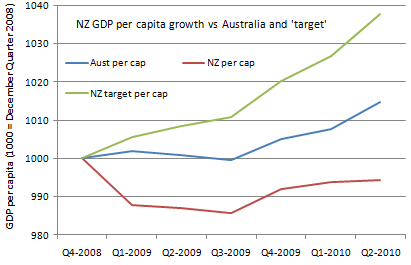 Not so good. 4% behind target after a year and a half, and going to get worse as we experience the second dip in the recession. Expect a whole lot more spin and no results. They can’t admit there’s a problem with achieving their own policy, let alone do anything about it.

24 comments on “Doing nothin’: The gap with Australia ”