Written By: mickysavage - Date published: 3:09 pm, December 9th, 2017 - 40 comments
Categories: bill english, doofus of the week, Media, national, the praiseworthy and the pitiful, you couldn't make this shit up - Tags: 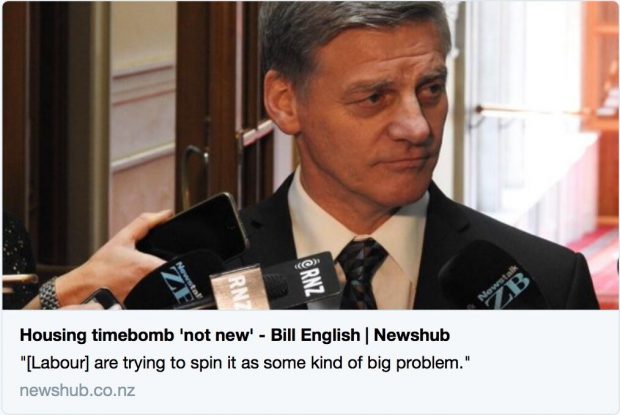 And with a late run Bill English clinches the award with his incredibly uncaring indifferent statements today regarding the housing crisis.

Bill English has denied leaving Labour in the lurch, saying the housing shortage and prison overcrowding are nothing new.

Lisa Owen questioned the National leader on Three’s the Nation on Saturday about briefing papers given to incoming ministers from Labour and NZ First.

The papers warn the high cost of housing is a drain on health, education, employment, homelessness and productivity, and is causing wealth inequality and increasing the cost of Government services.

“Elsewhere in the briefing papers that were released, there were 72,000 houses short around the country, a prison population blowout on the horizon, a dysfunctional Ministry of Health and no money for police pay rises,” Owen told Mr English.

“So have you left Labour a disaster zone?”

“None of that is new. [Labour] are trying to spin it as some kind of big problem. I mean, the business of Government is to deal with the issues that are there and there are always challenging issues.

If record homelessness and being 72,000 houses short are not crises then nothing is.  And English seems to be saying that everyone always knew there was a crisis.

I guess this is a slight improvement compared to the previous leader who tried to deny there was a housing crisis and then blamed Helen Clark for it both at the same time.

National, the party that clearly does not care that in a land of milk and honey too many people are living in completely inadequate housing.