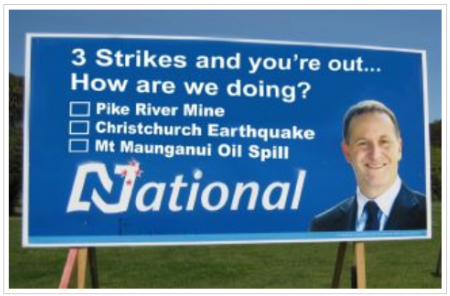 DPF is all up in arms over Rodney candidate Christine Rose sharing someone’s picture on facebook.

He seems to think she’s some extreme candidate who thinks John Key is personally responsible for the disasters.

Instead, any reasonable reading would have it that she’s agreeing that questions need to be asked about National’s handling of the disasters.

Questions like those the Pike River families are asking about John Key’s promise to do whatever it takes to get the bodies out.

Questions like Christchurch residents are asking about John Key’s promise that nobody would be worse off – when most people are.

Questions like those all over the media about why nothing seemed to happen in those first 4 or 5 fine days after the Rena was stranded.

Rose blatantly doesn’t think that Key is some sort of minor deity who can cause tectonic plates to move; DPF is a smart guy who couldn’t possibly think that she does.

Which means he is just trying to stir the sewer again, with ridiculous smears.

[ Also, when I went to the front page of kiwiblog I got this: