DPF does the right thing 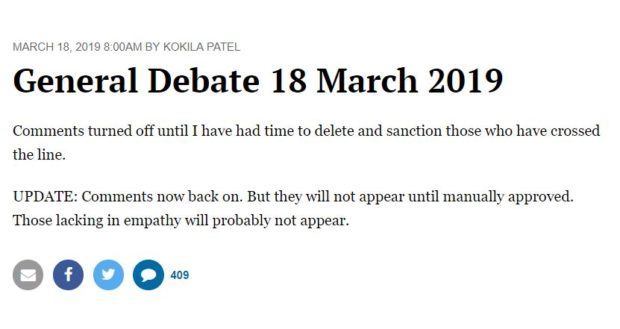 Looks like there is a bit of a crisis going on over in right wing blog land.

DPF has finally decided to take the rather extraordinary steps of turning off comments and approving them manually.  This is something that we have done from time to time in the past for sensitive posts.

But Kiwiblog has been out of control for a while and some really rancid things have been posted in comments over there.

And at Whaleoil things are going really strange with a paywall article headed “[n]ow is not the time to be bullied into silence” and text saying “[a]ll this is happening while – and in no small part because of – the left’s Orwellian clampdown on free speech . . .”

This is the trouble when you court support among the far right.

National as a whole has a major problem.  Its use of dangerous rhetoric has been very disappointing.

No doubt someone will say the left is just as bad.  Waiting for the first example of false equivalence …