Early childhood education is great stuff. Those first few years shape a child’s future more than any other. Getting into learning and into socialising early on leads to huge rewards later in life. For every dollar spent on ECE, society gets 13 back in benefits. It also allows parents to return to the workforce if they choose or need to so they can support their family.

That’s why National’s ECE cuts hurt so much. They’ve removed the additional funding for ECE centres with over 80% qualified teachers. This decision will affect nearly half of the country’s 4300 ECE centres (according to the minister, so probably low). Those centres are facing the choice: cut the quality of service or charge parents more.

Understandably, people dedicated to the education of our youngsters absolutely hate to cut the quality of the service they provide, so their first choice is to put up charges – but staffing cuts and higher teacher-child ratios are also on the cards.

That adds up to another $30 per week per child. For low-income families, especially, that’s a real blow. And no ‘tax swap’ will cover it.

One single mother who works full-time (just like Paula Bennett wants) for $600 a week and has two kids in full-time ECE says:

“I will have to work an extra day, which would be a Saturday, or take them out [of childcare] and get government assistance.” … “They told us they want to see more people in work.”

National’s ECE cuts may force parents out of work and kids out of ECE, creating more beneficiaries and denying kids education all to save a relative pittance.

So, what’s the defence for this? Deborah Coddington tries to make one:

“That Government decided no one was fit to educate the under-5s unless they had a degree in early childhood education, thus writing off 99 per cent of all parents.

What a smack in the face for all of us who’ve read What-a-Mess every night, spent hours teaching littlies to tie shoelaces, played Incy-Wincy-Spider, and repeatedly sung Never Smile at a Crocodile to deter car-sickness.”

Which just shows that Coddington ought not be an ECE teacher because she clearly has no damn clue what is involved. She then shoots her own argument in the foot:

“But National shouldn’t just cut the budget to save money. According to Ross Penman, a former Early Childhood Council president, public investment in this sector, based only on the benefits to the child (and their later success) provides a return of $7 for every $1 invested.

And let’s not just talk economics. In terms of brain development, what happens in a child’s first five years is more important than any period after that. By the time children go to school, the brain is closing down unused circuits.”

Let’s face the facts. National is cutting this and other hugely valuable public services so it can free up money for more tax cuts for the rich in the future. It’s a crime not just from an educational stand-point but an economic one too. National is basically slashing investment in our future for pointless tax cuts now.

We’ll see the results in the decades to come. By which time John Key will be permanently retired to Hawaii. 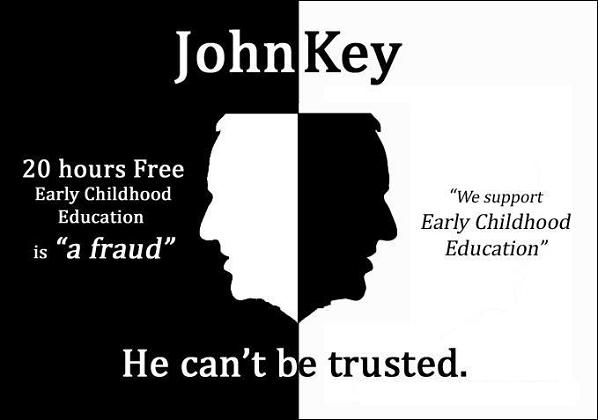