Economist on US debt politics

KAL (the cartoonist for The Economist) expresses my feelings about the political process over the last couple of months in the US. 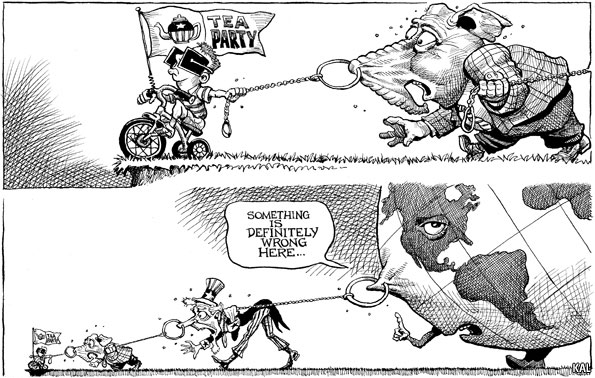 In the end, hopes for a grand bargain that addressed entitlements, taxes and near-term economic support ran aground on the harsh reality that all these things would require bridging profound philosophical differences that have developed over decades. The odds that the next few months will yield a different outcome seem low: further brinkmanship (albeit of a less terrifying sort than seen in the past weeks) is more likely. That has become the routine way that fiscal policy gets made in America. True, stockmarkets rallied with relief that the most reckless path has been avoided. Meeting such a low standard should hardly be considered a vote of confidence in America’s fundamental fiscal and political maturity.

An earlier article “Turning Japanese: The absence of leadership in the West is frightening—and also rather familiar” pointed out that we have seen this type of political ineptitude spreading out into the real economy before – in Japan.

The world has seen this before. Two decades ago, Japan’s economic bubble popped; since then its leaders have procrastinated and postured. The years of political paralysis have done Japan more harm than the economic excesses of the 1980s. Its economy has barely grown and its regional influence has withered. As a proportion of GDP, its gross public debt is the highest in the world, twice America’s and nearly twice Italy’s. If something similar were to happen to its fellow democracies in Europe and America, the consequences would be far larger. No wonder China’s autocrats, flush with cash and an (only partly deserved) reputation for getting things done, feel as if the future is on their side.

America’s debt debate seems still more kabuki-like. Its fiscal problem is not now—it should be spending to boost recovery—but in the medium term. Its absurdly complicated tax system raises very little, and the ageing of its baby-boomers will push its vast entitlement programmes towards bankruptcy. Mr Obama set up a commission to examine this issue and until recently completely ignored its sensible conclusions. The president also stuck too long to the fiction that the deficit can be plugged by taxing the rich more: he even wasted part of a national broadcast this week bashing the wealthy, though the Democrats had already withdrawn proposals for such rises.

Yet Mr Obama and his party seem a model of fiscal statesmanship compared with their Republican opponents. Once upon a time the American right led the world when it came to rethinking government; now it is an intellectual pygmy. The House Republicans could not even get their budget sums right, so the vote had to be delayed. A desire to curb Leviathan is admirable, but the tea-partiers live in a fantasy world in which the deficit can be reduced without any tax increases: even Mr Obama’s attempts to remove loopholes in the tax code drive the zealots into paroxysms of outrage.

Quite simply the resolution of this particular crisis is just the beginning. Having myopic idiots like the tea party proponents being able to push the house republicans into unsustainable political positions does nothing to fix the structural problems in the US fiscal system. So this problem is going to keep occurring. Next up, the US congress has to pass their 2012 budget.

34 comments on “Economist on US debt politics ”