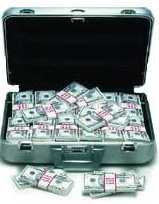 National has announced that John Key donated $30,000 to the party this month. That’s all well and good; Helen Clark donates a similar amount to Labour most years.

What’s new is that the donations Key and every large donor to National or any other party are now public. Previously, National received up to $2 million a year in secret donations that it purposely routed through anonymous trusts, so as to hide the identities of the donors from the public. We don’t know who was giving such huge sums to National but there is evidence that donors included the Insurance Council, who made a secret deal with National to privatise ACC, anti-MMP campaigner and multi-millionaire Peter Shirtcliffe, and Key himself, who was initially welcomed into the party in return for large donations.

The Electoral Finance Act has banned the practice of large secret donations. Now, the public get to see who the moneymen behind the parties are. That’s a good thing for democracy in New Zealand. Without the EFA, National would still be keeping its big backers secret from the voters. This announcement of Key’s $30K donation confirms the Act is working.