The Internet is great for politics as a forum for discussion and a place for organising and mobilising but don’t let it replace the real action, which is out in the streets.

We’re going to do a series of flyers for readers to print off and distribute, as we did last election, and set up a campaign hub like in 2008 too.

Here’s the first of the flyers as a PDF. It draws together Key’s “we would love to see wages drop” admission with the results of his rule. Thanks to William Joyce for the artwork (and sorry for the delay, tech issues). 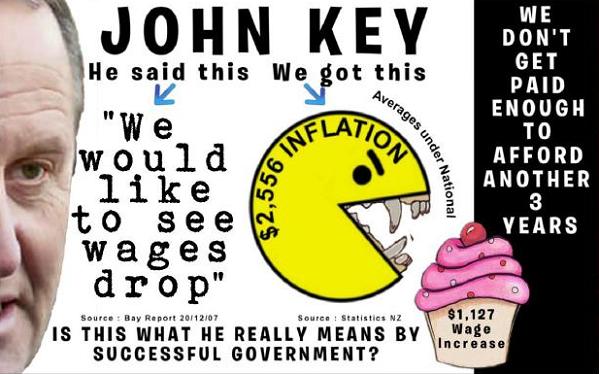 The idea is that they can be printed off four per A4 page, in colour or black & white, then cut up into easy to handle A6-size flyers. These ones are single-sided, future ones may be double-sided. This flyer is authorised by Lynn.

Now all that’s needed is you. Dropping these flyers in letterboxes around your neighbourhood is a great activity if you’re not involved in a political party but want to spread the message, or if you are involved with a party, and want to slip something extra in with your drop.

If you have any ideas or flyers, send them in. Remember, it’s perfectly legal for you to create your own flyers and other materials with your own authorisation – as long as you don’t call for people to vote for a particular party (you can call for them not to vote for a certain party). We’ll keep a track of how often the flyers are downloaded and make an estimate of the print value, but, at a cent or two per flyer, there’s no chance of passing the $12,000 level at which third party spending has to be registered with the Electoral Comission.