“I’m all for responsible use of credit cards, but running a story about spending $95/head at dinner entertaining the Executive Director of the World Bank is ridicolous [sic].Foxglove is a medium priced restaurant.

What an out of touch fuck.

Maree is meant to feed four people for a week on $200. Farrar says she should just economise if money runs tight.

John Whitehead and two World Bank shmoos chowing down for $300 a meal on our dime? Sweet as.

“Should we take the World Bank Executive Director to Uncle Chang’s instead?”

When old women are eating cat food to make ends meet, why not? Do the elitist bastard good to have to eat  amongst the middle-class, at least, for once. 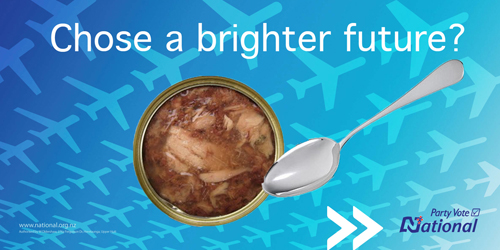 PS. Idea we should spend a fortune to feed someone because they happen to be World Bank Executive Director (whatever that is) reminds me of the best rebuke of elitist airs I know:

Gandhi wore his dhoti for an audience with King George V of England.

When asked how he could possibly contemplate meeting the monarch clad in nothing but a length of cloth draped over his loins Gandhi simply said, ” Why not? The King wears enough clothes for the two of us.”

PPS. This was written a few days ago. Since then new stats show the price of bread is up 32% under National. Rome’s elite used to distract and placate the headcount with panem et circenses. Bread and circuses. We’ve got the circus alright. Key is head clown. But now even bread is getting too pricey for many.