EMA resorts to making stuff up 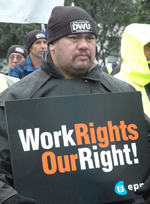 The Employers and Manufacturers Association has a new employment survey out today that aims to portray personal grievances as “way out of hand” and add momentum to their ongoing campaign with the National Party to remove the right of workers to appeal against unfair dismissal during their first 90 days in a new job.

But the survey’s methodology is so hopelessly flawed that it’s worse than useless. As the EPMU points out, the survey is based on a self-selected sample of employers who belong to the EMA, which means it is skewed heavily towards employers who see personal grievances as a burning issue and have taken the effort to join an employers’ lobby group. That’s not a credible sample.

Furthermore, the EMA can’t have been unaware of a reliable, independent study by the Department of Labour late last year that came to exactly the opposite conclusions. Turns out the average business experiences only 1.5 employment problems per 100 employees a year, at a cost of less than 0.4% of the wage bill. There’s also no evidence that the incidence of employment relationship problems is increasing, and most cases are settled at minimal cost to employers.

The EPMU’s Andrew Little is not impressed by the EMA’s use of flawed stats to promote their political agenda:

“The EMA are not numerically illiterate. They will be well aware of the major sampling errors in their work, and the fact they have chosen to publish it regardless shows their political intentions this year.

“We expect New Zealanders’ work rights, including personal grievances, will come under increasing attack from the National Party and business lobby groups as the election nears, but they would have more credibility if they engaged in facts rather than spin.

“New Zealanders have a right to expect fairness at work and for the law to provide protection against arbitrary dismissal, regardless of whether some employers find it inconvenient.”

Employer groups were furious last year when the union movement defeated National’s 90 Day No-Rights Bill, and they’re terrified of losing their chance again in 2008. I suspect we’ll start to see a lot more of this kind of dishonest propaganda from the right as the year progresses.

7 comments on “EMA resorts to making stuff up ”