Pete Hodgson is continuing to chip away at English’s ministerial allowance story. English looks very uncomfortable as Brownlee and Key cover for him. To my mind, this is yesterday’s crucial exchange:

Hon Pete Hodgson: If the Hon Bill English has no pecuniary interest in his ministerial residence, then how come the email I have here, dated 19 March, shows Mr English telling Ministerial Services which bank account to put the money into?

So English is writing to tell Ministerial Services the bank account of the trust that he has nothing to do with – well, since he took his name out the list of trustees – that owns the house he and his family live in, which is getting money to pay for the cost of his and his family’s accommodation because he is a minister supposedly not based in Wellington. And we’re supposed to believe he has no pecuniary interest in this trust?

What is the legal test, Mr Key? And how does Mr English’s trust arrangements satisfy that test? Would the test have been satisfied if he hadn’t, at the last minute, changed his relationship with the trust?

The other interesting quote:

Hon Pete Hodgson: Has the Minister been advised that a request for an additional $20 per week of cleaning allowance was made by or on behalf of Mr English on 5 Decemberâ€”the day Treasury told Mr English that Government expenditure had to be seriously cutâ€”and that by 10 February Mr English had managed to claim cleaning costs even in excess of the new higher allowance? 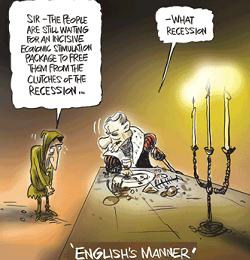 So, this is English requesting another $20 a week, on top of the $40 a week he is already getting for cleaning, on top of the other $850 a week he is getting for housing – all part of an allowance he isn’t entitled to – on top of his $5300 a week salary. Meanwhile, the cleaners who clean English’s office, whose wages are frozen by his public wage ‘freeze’, are on $12.55 an hour – 5 cents above minimum wage.