Equal pay protestors chase the Government out of the Dunedin hospital

Protestors have marched into Dunedin hospital and chased the PM & health minister out of the building pic.twitter.com/mvSGbhJDQB

The National Party just tried to casually bribe Dunedin voters and got chased out of town instead by women in pink hats. If that’s not a potent symbol of the end of National’s government I don’t know what is.

Local women active in the equal pay for Mental Health workers fight co-ordinated a spontaneous protest after hospital staff let them know of the presence of the Prime Minister and the Minister of Health. Bill English and Jonathan Coleman were meant to be in the hospital for an hour as part of policy announcement but left early.

…each cutout represented 300 staff not being funded.

The lack of staffing and resources at Southern DBH is a symptom of the government’s $2.3 billion of health underfunding…

That’s the equivalent of 30,000 missing staff and an immeasurable number of people missing out on the care they need, when they need it. 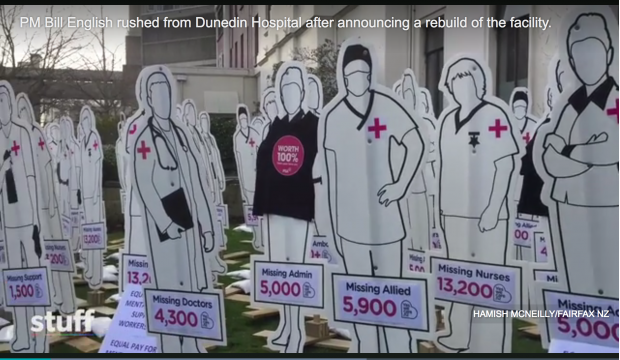 The protestors were well organised and saw English and Coleman off with chanting,

THEY RAN AWAY FROM EQUAL PAY