ETS is useless, scrap it

I just finished reading an article by Richard Harman at Politik on “How climate change could derail the government formation talks”. Amongst other things it outlines the political positions of the major parties who are going to be involved in coalition talks and the way that the so-called Productivity Commission are dealing with the issue of climate change. Frankly I think that all of them are just deluded and haven’t got the vaguest idea about any constructive way to deal with it.

At the heart of the Commission’s study are two huge issues – the future role that agriculture will be required to play in emissions control and the future role (if any) of the Emissions Trading Scheme.

The discussion paper is critical of the Emissions Trading Scheme. 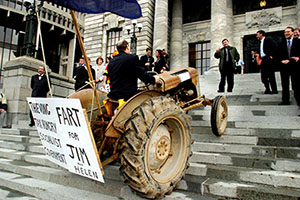 That is hardly surprising. The original Emissions Trading Scheme (ETS) was a valiant but deeply flawed political compromise trying to bring a market driven solution to long term issue. At the time it was an innovative attempt to develop a market capable of causing economic changes in the long term interests of everyone.

The problem was that the horsetrading by special interest groups removed or delayed significiant emitting groups entering into the ETS. This was  aided by the characteristic National Party scare tactics of a “fart tax”.  Those kinds of scare tactics seem to be National’s only way to engage in our countries policy generation, as was demonstrated by the almost complete lack of any significiant policy this election and their similar use of blatant lying to mobilise their voting community.

In particular the horsetrading resulting from the scare tactics employed made the ETS ineffective from the start by removing the most polluting industry in NZ, farming, from it. Excluding farming from the ETS effectively meant that farmers avoided having to put the full input costs of their methane emissions, carbon emissions, and any carbon sink depletion into their cost of production making their goods cheaper and enabling higher profit margins by foisting any costs directly on to taxpayers.

National continued their avoidance of applying user pays to the farming community and other preferred contributors after they came into office. Instead, they fostered the most extensive increase in greenhouse gas emissions in our history by massively increasing the largest single greenhouse emitter industry, dairy.

This caused a massive land displacement of less polluting farming and forestry industries into dairying.

At the same time they steadily reduced the effective amount of research being done on ways to ameliorate greenhouse gas emissions while doing a few token PR exercises to talk up their remaining show R&D programs. They also allowed the use of some of the worlds most dodgy carbon credits in our ETS, which devalued the whole things.

Needless to say the Productivity Commission had this to say…

“Two-thirds of emitters in the NZ ETS considered it has did not affect reducing their emissions,” it says.

“The Ministry for the Environment’s own evaluation of the NZ ETS found it has “not significantly influenced domestic emissions or business decisions.”

Of course in typical National hypocritical style, they also effectively increased the future costs to the rest of the economy as they signed up to global initiatives like the Paris accord to limit the emissions.

I’ve deliberately not been involved in producing any significiant greenhouse gases for decades. Those that I am responsible for, I try to pay as much as I can of the full cost for – including the climate change costs. I expect that everyone else should do so as well.

That was because I got exposed to theories about human induced climate change when I was doing an BSc in earth science back in the late 1970s. It became obvious from the actual evidence by the early 1990s that it wasn’t a theory, but something that we were imposing on ourselves and for many generations to come.

More importantly I have a very clear knowledge of the types of climates that we’re rapidly and probably irreversibly modifying our world into. It is the normal climate of earth without the millions of years of the Quaternary ice age that our species and all of our client species evolved for

So I have a car that is lucky if it drives 5000kms per year. It is a highly maintained 20 year old car that I will replace or supplement when I can see something new that offsets the carbon cost of manufacture. Probably an electric bike. I try to purchase goods and services that have reduced or minimal carbon footprints. This is the pattern of all of my purchases. I try to buy good quality and I keep it for a long time.

Recently work occasionally sends me around the world for our overseas trade. So I organise offsets whenever available.

It also means that I’m highly intolerant of greenhouse gas freeloaders, especially ones who don’t make any effort, and even more so for those who want to stick me and my relatives with their bill. I’m also completely uninterested in ineffective facesaving measures.

This colours my opinions criteria below.

Needless to say the only political parties in parliament that support continuing the ETS in anything like its current form are the freeloader party National and their sock puppet Act – ironically the two parties who were most opposed to the scheme in the first place.

The nett effect is that over the near future, the current ETS under National will be giving NZ about an additional $1.4 billion uncovered annual costs to buy offshore emission units to meet their international commitments. This means that every taxpayer in NZ will be facing a bill of more than $400 per year. This will steadily increase over time if our emissions do not fall.

To not do this will mean that it is likely that over time the tariffs and taxes will instead be imposed on agricultural goods by countries who are living up to their commitments. Not to mention that harmful effects on industries like tourism (larger than the dairy industry) that rely on our clean green image.

National in their usual fiscally irresponsible style hasn’t budgeted for any significiant part of this oncoming financial burden. I guess that they would prefer that it comes as a surprise to the taxpayers of the future.

As Richard Harmon documents, National’s specialised interest groups of Federated Farmers and DairyNZ prefer this policy. It means that they can push their production costs on to the rest of us.

But I suspect that there are no possible coalition partners who agree with National and them. Neither NZ First nor the remote and highly unlikely possibility of Greens are likely to bind support for the ETS in any form into a coalition agreement.

NZ First wants to scrap the ETS and override it using parliament’s powers to have a UK style Climate Change  act.

Essentially the Act requires the Government to have a “whole of Government approach to carbon emissions which would require it to set carbon budgets which would be met through a number of measures ranging from subsidies and government purchasing through to taxes and penalties.

This would leave the discretion of how much to include agriculture with the Government of the day.

Now this has some merits because it quite clearly makes the government of the day directly responsible for funding climate change commitments and actively involved in directly trying to reduce the general taxpayers bill. In particular it means that it no longer becomes possible for the government of the day to hide away from their responsibilities behind a inefficient and ineffective fake marketplace whilst foisting the uncovered bill on to general taxpayers.

The Greens essentially want something legislatively quite similar to NZ First (curiously Richard Harmon was rather silent of their actual policies – so I added a link). Just another commonality between these two parties.

The Greens have less research and with more of other bells and whistles like the addition of a policy commitment to plant trees, lots of trees – apparently as a carbon sink, and an adaption fund.

While the tree-hugging idea may play well to some of the green and conservationist audience. It is an appalling stupid idea if they are thinking of it as a carbon sequestering policy. Even if the forests didn’t get cut like the logging and biofuel industries would push to happen. Forests don’t sequester virtually any significiant carbon over the long term. About the only thing that they are effective at doing is to reduce the methane emissions  by taking land away from dairy.

BTW: If the Greens were serious about sequestering. Then they need more productive carbon sinks like swamps close to rising sea shores. They are the world’s most productive bio environments at fixing carbon because of the anaerobic environs and they sequester a lot of carbon as they slip under the rising water of the climate change that will already occur. As importantly they make a more productive use of all of NZ’s deltas and drained swamps which will disappear underwater over the next few centuries anyway.

Meanwhile Labour’s policy is to keep the ETS but to bring agriculture and some other freeloader industries into it. In other words to patch the existing system.

Frankly I can’t see that working politically. I can’t see that the Labour caucus will be able to withstand the shit storm of embedded special interests, lobby groups and their court cases claiming damage to existing interests. It is likely to simply to continue propping up a deeply flawed and increasingly ineffective system that simply doesn’t change economic behaviour.

More importantly I can’t see keeping the ETS as being something that either possible coalition partner is likely to agree with.

I suspect that ETS has become a political football in the next parliament, but probably not part of a coalition agreement with either National or Labour. My guess is that both NZ First and the Greens will want it off the table unless it is agreed that it will go. That leaves them able to vote against further stupid patches being added to it.

That is because the actions of Labour in its construction and National in its effective destruction have made it completely unfit for purpose.

It was an interesting idea at the time when it was new and innovative. But now just one of many similar failures that demonstrates that faux market solutions interfered in by government responding to special interests aren’t useful for solving long term issues. All they do is to throw the tax burden and costs on to others.

For the remaining simple minded climate change deniers out there, this is not a post for you.  You need to go and learn some science and indulge less in childish fantasies. In the meantime just let the adults talk and you can listen. Otherwise I will spank you and send you to the corner for a year.