Mike Moreu from The Press is shaping up to be quite a fine cartoonist. Here’s his take on the Religious Right’s petition to restore the riding crop lady‘s right to beat her children. 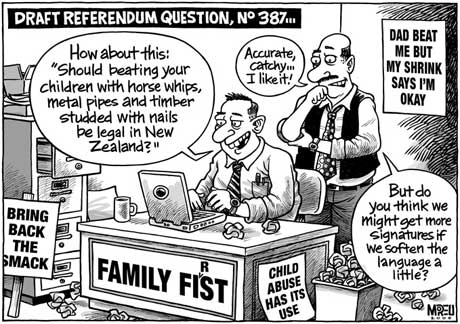 Meanwhile the folks over at Newzblog have done a great send-up of the increasingly incoherent Garth McVicar from Sensible Sentencing and the equally dreadful Christine Rankin of “we’ve got a Maori problem” fame.

All the more timely in light of today’s speech. I wonder what Garth would think of boot camps?