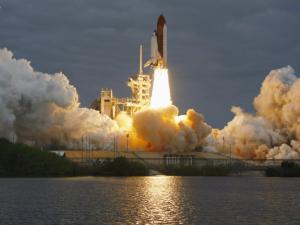 I’m a geek and I’m proud.  I grew up with science fiction, and with the heartfelt wish and hope that humanity would one day make it off this poor abused planet and spread to the stars.  But I think it has now become obvious that we’re not going to make it.  In practical terms our exploration of space has peaked, and is now in decline.

Obviously these thoughts have been triggered by the end of the space shuttle program:

Space shuttle Atlantis touches down, ending an era of adventure in space

She roared into the heavens a fortnight ago atop a column of fire, enthralling a million spectators as she set off on her final voyage. But the space shuttle Atlantis slipped quietly back to port on Thursday at the end of her five-million-mile journey, gently lowering the curtain on three extraordinary decades of adventure in human space flight. …

Despite the rallying words, many feel that the moment of wheels-stop for Atlantis also marked the end of a half-century of US dominance in space.

For the first time in the agency’s 53-year history it has no vehicle, existing or in the works, capable of launching astronauts into orbit. The International Space Station, built almost exclusively by American astronauts flying shuttles, must now be serviced by Russia’s Soviet-era Soyuz spacecraft.

The longer-term future for American space exploration is hazy, a huge concern for many at NASA. President Barack Obama has set a goal of sending astronauts to an asteroid by 2025 and Mars in the mid-2030s. But the space agency has yet to even settle on a rocket design. …

It certainly feels like the tide is going out. A point also well made in this “graph” by one of my favourite cartoonists.  We’re still talking tough of course, but it’s hard to see how a real space programme can ever be maintained in the face of the three coming tsunamis: economic chaos, peak oil, and climate change.

But there is one silver lining in this depressing cloud.  The end of the dream of space certainly focuses attention on taking care of the one and only planet we’re ever going to get.

34 comments on “Farewell to space ”