Scientists are running out of superlatives:

Global temperatures in February smashed previous monthly records by an unprecedented amount, according to Nasa data, sparking warnings of a climate emergency.
…

The global surface temperatures across land and ocean in February were 1.35C warmer than the average temperature for the month, from the baseline period of 1951-1980. The global record was set just one month earlier, with January already beating the average for that month by 1.15C above the average for the baseline period.
…
“We are in a kind of climate emergency now,” Stefan Rahmstorf, from Germany’s Potsdam Institute of Climate Impact Research and a visiting professorial fellow at the University of New South Wales, told Fairfax Media. “This is really quite stunning … it’s completely unprecedented,” he said. 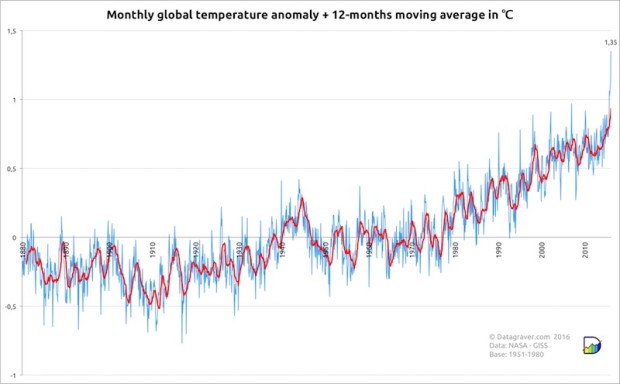 The evidence that we have significantly underestimated the speed of climate change is mounting steadily.

93 comments on “February breaks all records ”