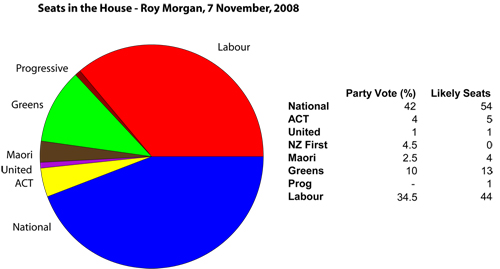 The final Roy Morgan poll is out and the Left (LPG+M) has it by a nose with 62 seats out of a 122 seat Parliament. The Greens will be happy with 10% – that puts them in a strong negotiating position after the election and gives a 17 seat voting bloc in conjunction with the Maori Party.

A bit of a worry to see NZ First on 4.5% – I’d like to see them out of Parliament, or failing that blocking a hard-right National/ACT government. Having NZ First on 4.5% is the worst possible scenario.

Roy Morgan was the most accurate poll at predicting the last election result. We’ll have to wait until tomorrow night to see if they’ve done it again but one thing’s for sure – this election is still anyone’s game.