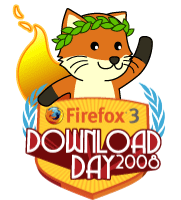 Sick of Internet Explorer for being slow and buggy and not open-source?

Why not try out Firefox instead? It’s a free, open-source browser, developed collaboratively for Windows, Mac and Linux. It’s claimed to be (and most people seem to agree) the fastest most secure, most customisable browser.

On June 17, 2008, Firefox wants to set a new Guinness World Record for Most Software Downloaded in 24 hours.

You can join the action here and support open-source web browsing while you’re at it!