Ken Perrott at Open Parachute has been debunking some of the nonsense surrounding the debate on fluoridated water by investigating claims made against fluoridated water. His background is in scientific research, so he tends to actually read the papers cited by others. Unsurprisingly there are some of the weird nonsense interpretations around of papers because many people appear to avoid actually reading the details. This post was published on his site yesterday and has been reposted with permission.

In the current fluoridation debate anti-fluoridation activists will often claim fluoridation of public water supplies actually doesn’t reduce tooth decay. This conflicts directly with the advice of our health authorities – so what is the truth?

Again I will directly consider the claim of the Fluoridation Action Network of NZ (FAANZ). It’s summarised in the first objection to fluoridation (1. New science proves there is no benefit from swallowing fluoride ):

There are numerous modern studies to show that there is no difference in dental decay rates between fluoridated and non-fluoridated areas. The most recent, large-scale one was conducted in Australia (Armfield & Spencer, 2004 Community Dental Oral Epidemiology. 32:283-96).

When you observe the statistics of the world they clearly show tooth decay has declined in both fluoridated and non-fluoridated areas alike. This is a trend that is demonstrated when viewing the statistics across the States in America and in the smaller counties. See the charts and findings by Dr. Bill Osmunson in the above video by Professional Perspectives.

In New Zealand there have been two recent studies that showed there was no difference in dental decay for permanent teeth. One was the Southland Study in 2005 and the other was the Auckland study in 2008. These, among many other studies, have proven water fluoridation to be ineffective.

But, health authorities in New Zealand disagree – and they have the data to support their case. So how credible is the FANNZ claim?

Again, another citation, unlinked, so I had to go to the trouble of hunting it down to read what it actually does say – which turns out to be the exact opposite of FANNZ claim! Same problems I met when I looked at their claim about toxic elements in fluoridating agents (see Fluoridation – are we dumping toxic metals into our water supplies?).

The Australian study investigated concerns about the high use of bottled and rainwater. Several social, economic and dietary factors were considered but the major significant effect was that of fluoride. Children consuming tank and bottled water had much higher carries than those consuming water from fluoridated public water supplies. This was found for deciduous teeth, but not for permanent teeth and the authors speculated on the dietary and other reasons for this.

The authors considered lack of fluoride is an important problem for tank water use saying:

“Efforts could be directed at either reducing the use of tank water for domestic drinking water consumption or further encouraging the appropriate use of fluoride to compensate for the lack of fluoride in the drinking water.”

About bottled water they say:

“consumers currently have little choice in Australia and the imminent introduction of fluoride-containing bottled water does not look likely.”

“It is also time that bottled water manufacturers in Australia began marketing fluoridated water. In the US more than 20 companies produce water with optimum fluoride concentrations.”

They finish their paper with this:

“Bottled water is promoted as a healthy, chemical-free alternative. There is a need for bottled water manufacturers to take a stand on the issue of the benefits of appropriately fluoridated water and provide consumers with choice.”

So another example of FANNZ using a citation inappropriately – to support a claim the exact opposite to the study’s results.

The Ministry of Health (MOH) keeps records on the oral health of New Zealand children – and anyone can download that data from their website. There is data for age 5 and year 8 children over the time period 1990 to 2011. I’ll have a detailed look at the data for 2002 – 2011 (earlier data doesn’t include the ethnic breakdown which is very relevant). But first a few comments about the way many of the anti-fluoridation activists are cherry picking this and similar data to support their arguments.

Recently I received two specific claims made about this data:

In both claims data was carefully selected to “prove” fluoridation doesn’t work. One can’t directly compare Christchurch data with that for the whole of New Zealand as that ignores the influence of ethnic, social and other factors. And selection of one small piece (Waikato in 2011) of the total picture cannot give you any idea of that total picture. The data includes all sorts of variation over time and region and these cherry-pickers are make cynical use of this.

I have summarised the MOH data in this table as the changes for the percentage of carries free teeth, and mdmf – the mean number decayed, missing and filled teeth per child per year. The data are for 2 age groups and are averages, over the period 2002 to 2011, of annual data . The totals and the separate data for Maori give some idea of differences which are probably largely a result of the well established social and economic disadvantage of Maori.

Effect of fluoridation of % carries free and mdmf

I think that shows fluoridation is associated with a clear increase in numbers of carries free teeth, and a clear decrease in the mean decayed, missing and filled teeth.

So much for FANN’s claim “that there is no difference in dental decay rates between fluoridated and non-fluoridated areas.”

The figures below show the g=data graphically to enable readers to get a better understanding.

First a comparison of average annual % carries free teeth and mdmf in the period 2002 -2011 for the two age groups.

Plots of the data below give and idea of variability and trends. They also show the influence of social and economic deprivation is long-term.

Some anti-fluoridationists are making an issue of the apparent improvement in oral health for people consuming unfluoridated as well as fluoridated water. For example, the claim above asserts:

“When you observe the statistics of the world they clearly show tooth decay has declined in both fluoridated and non-fluoridated areas alike.”

Perhaps they think that this somehow covers up the fact that despite the trends oral health it is still better for the fluoridated groups.

Mind you, another reason is that many of the statistics they refer to are presented only graphically. For example this figure from Fluoride Alert (an anti-fluoridation group) actually does not correspond to the data it refers to. 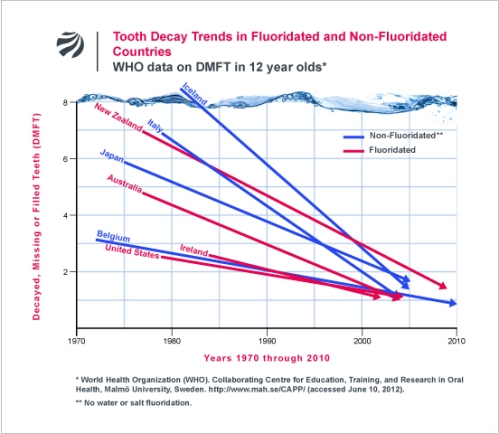 It seems the figure was constructed using only 2 data points of each line – 1 very old and 1 recent. This means that all sorts of factors, (such as changes in criteria and attitude of dentists towards saving teeth) could be involved – quite apart from fluoridation.

The data I have plotted above the New Zealand in the period 2002 – 2011 does not show the declines that the anit-fluoridationists claim.

Another example of cherry-picking to mislead.

Getting a grip on the science behind claims about fluoridation

Is fluoride an essential dietary mineral?

Fluoridation – are we dumping toxic metals into our water supplies?

Tactics and common arguments of the anti-fluoridationists

306 comments on “OP: Fluoridation – it does reduce tooth decay ”