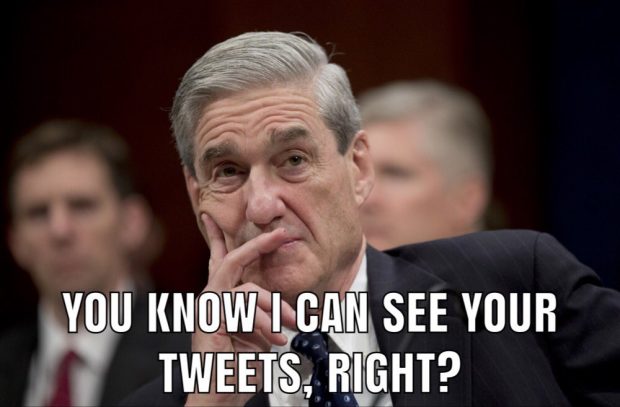 Over in the US of A there have been further developments in the continuing saga about whether or not Russia tilted the election in Trump’s favour. And more importantly in legal terms did Trump and his team acquiesce in what happened.

Flynn is the second guilty plea in the Mueller investigation. The first, George Papadopoulos pleaded guilty to lying to FBI agents in what was clearly a deal.

Two others, Paul Manafort and Rick Gates, have been charged with and pleaded not guilty to charges including conspiracy against the United States, conspiracy to launder money, acting as unregistered agents of Ukraine’s government, false and misleading statements and failure to file reports of foreign bank and financial accounts. These do not necessarily relate directly to Manafort’s involvement in Trump’s campaign manager.

Flynn, the guy who used to chant “Lock her up” at Trump rallies, has done the same.  To understand the full irony of this watch he following video.

When the crowd chanted “Lock her up!” about Hillary Clinton, Michael Flynn smiled. “You’re damn right,” he told last year’s Republican national convention. “You’re exactly right. There’s nothing wrong with that! And you know why we’re saying that? We’re saying that because if I – a guy who knows this business – if I did a tenth of what she did, I would be in jail today.”

On Friday Flynn’s bravado and righteousness had been stripped away. A humbled Flynn buttoned his jacket as he walked into the US district court in Washington, to be greeted by the austere trappings of a federal courthouse with its solemn lawyers, stiff-backed marshals and hungry reporters.

Flynn, the man once led crowds in calling for Clinton to be put behind bars, found himself standing before a judge, pleading guilty to making false statements to the FBI, and facing a possible prison term. Not for the first time in Donald Trump’s presidency, it was the kind of plot twist that most thriller writers would avoid as just too improbable.

Clinton herself maintained a diplomatic silence, but for her supporters, a sense of schadenfreude may be irresistible.

But it appears that Flynn has cut a very generous deal.  Which strongly suggests Mueller is targeting people higher up the chain.  From Abigail Tracey at Vanity Fair:

The fact that Flynn was not charged with any other crimes, as well as the fact that Mueller did not convene a grand jury to secure an indictment, immediately fueled speculation that Trump’s former top adviser is cooperating with the government. For months, a steady drip of news reports have suggested a web of clandestine lobbying efforts by Flynn and his son Michael G. Flynn on behalf of foreign governments including Turkey. Mueller’s apparent hesitance in charging Flynn, despite reports that he already had enough evidence to arrest the pair, was widely interpreted to mean that Flynn’s lawyers were working on a deal. Several days ago, Trump’s lawyers confirmed that the former adviser’s attorney stopped sharing pertinent information tied to the probe with the White House legal team—a move that seemed to confirm that Flynn had, in fact, flipped.

“On its face, it is a really, really good deal for him,” Sol Wisenberg, a white-collar criminal defense attorney who worked on the Whitewater investigation, told me—assuming that Flynn doesn’t face any additional charges and that immunity for his son is part of the agreement. “He is obviously cooperating. There is no way he is not cooperating, there is just no way,” Wisenberg told me. “If he wasn’t cooperating he would be indicted and I guarantee you there would be more counts than this.”

That conclusion was confirmed later Friday morning by ABC News, which reported that Flynn, facing mounting legal costs and feeling “abandoned” by Trump, had made the decision to cooperate with Mueller. Sources told the outlet that after Flynn was confronted with the full array of potential charges against him, he agreed to testify about President Donald Trump, as well as members of Trump’s family and others in the White House. “He is prepared to testify that president Trump, as a candidate, ordered him and directed him to make contact with the Russians,” ABC’s Brian Ross said on air.

This was not the actions of a renegade individual.  Flynn was in close touch with senior members of the Trump transition team both before and after he spoke with the Russian ambassador, Sergey I. Kislyak, about American sanctions against Russia immediately after the election.

And the Trump White House response is getting really weird.  Trump has tweeted that Flynn’s lies are why he was fired as National Security Advisor.  This raises many questions about Trump’s pressuring of former FBI Director James Comey to drop the investigation into Flynn’s actions.

In a really weird twist Trump’s lawyer John Doud has taken responsibility for the tweet. And I thought his tweets were just the random rantings of a mad man.

I had to fire General Flynn because he lied to the Vice President and the FBI. He has pled guilty to those lies. It is a shame because his actions during the transition were lawful. There was nothing to hide!

Of course the charges so far do not judicially prove collusion with Russia during the last election campaign.  But further charges concerning the Russian connection must be close.

Is this how it ends?

Update: As Macro points out Ben Ross has since clarified that his source said that the direction from Trump to Flynn to contact the Russians came during the Presidential Transition and not the election. This may help Trump if it is correct but there is still strong evidence of conspiring to pervert the course of justice.

147 comments on “Flynn cuts a deal while Trump scrambles ”