The Government has launched a new suicide prevention action plan. Suicide is a tragedy that has touched several Ministers personally and it is good to see them putting more effort into confronting it. The aim of the strategy is to improve mental and social well-being for at risk people as well as providing more effective intervention following suicide attempts.

In many ways suicide, like crime, is a symptom of a society in trouble. The reforms of the 1980s and 1990s caused wages to fall and unemployment to rise. As a result, both suicide and crime increased, peaking in the late 1990s, as many people, especially young adults, found themselves unemployed with no prospect of finding a job to give their lives purpose. When National left power and the Government enacted its policies of high employment, wage growth, and better social services, both suicide and crime started to fall; some of the underlying causes of suicide and crime – unemployment, social disconnection, and a sense of worthlessness – were reduced. As a result of these policies, the Government has already been enormously successful in reducing suicide, in 2002-2004 (figures are released for three year periods) there were 13.1 suicides per 100,000 people, down 19.6% from the peak period, 1996-1998. 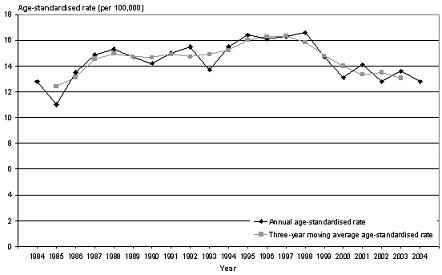 Now that those socio-economic causes of suicide have been reduced it is time for the Government to deliver more specialised resources for those particularly at risk. It is difficult and often traumatic work for the social workers and other public servants involved. We should offer them every support in their efforts.

[Update: see the graph on page two here [PDF], for how the reforms increased suicide by young males, and remember that leap represents 70 real human beings each year]

31 comments on “Focus on suicide ”