First he was “misrepresented”, then his comment was “lighthearted”, and now he’s claiming he never said it. Which is it John? 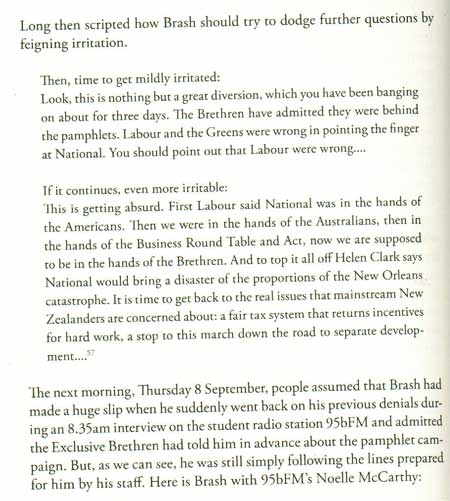 In an interview today with Mickey Havoc, Key now denies ever having made the comment (“I did not say that quote”), claims he never took part in an interview, asserts that the reporter was “eavesdropping”, implies the reporter is lying, and states rather ominously – “there’s more to this than meets the eye” and “we’re taking our own issues with it”. He even loses it a bit at the end under pressure from Havoc and throws in a “don’t give me that crap”.

Anyone remember that advice (see image) from Richard Long to Brash in The Hollow Men in relation to accusations about foreknowledge of the Brethren campaign to ‘try to dodge further questions by feigning irritation’?

You could almost be forgiven for thinking Key and Brash had been coached by the same guy. On the other hand, maybe Mr Key’s just not as friendly underneath all the gloss as some may have supposed.

The audio’s four minutes long but I reckon worth having on the record: