National is no big fan of free speech. They have a long history of heavy handed attempts to stifle dissent. The recent fuss around Chinese security’s assault on Green MP Russel Norman raises yet another example.

Instead of defending a New Zealander and a fellow MP’s right to protest, John Key thought it necessary to make a degrading, secretive personal apology to China for Norman’s actions. Instead of asserting every New Zealander’s right, Key is lying about the incident, accusing Norman of “charging at the [Chinese] Vice-President with a Tibetan flag”, a laughable lie to anyone who has seen the video coverage.

The most disturbing aspect of National’s handling of the event, however, is the way that they are going to use it as an excuse to further restrict free speech. Ordinary members of the public protesting at Parliament are already “kept in a designated space”. MPs have so far been exempt, they can go anywhere. Sounds like that’s going to change:

“The apology was in relation to our failure to provide proper security for the vice-president when he entered and exited Parliament,” Mr Key said … Mr Key said he was going to take the matter up with the Diplomatic Protection Squad, the Ministry of Foreign Affairs and Parliament’s Speaker when he returned. “I think it’s unacceptable that a dignatory of that level can’t enter the building without their integrity being compromised,” he said. … 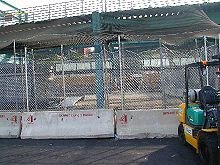 It is bad enough that you and I are confined to “designated space”. It will be intolerable if our elected representatives are denied the right to effective protest on our behalf. National wants to set us on the path to America’s notorious “free speech zones”*. If we, people and MPs alike, don’t want to end up in cattle pens, the time to speak up is now. Every MP should oppose any proposal to further restrict the right to protest on the grounds of Parliament, or anywhere in this country.

* That’s right, in the “land of the free” protesters are herded in to “areas set aside in public places for political activists to exercise their right of free speech”. George Orwell would have been proud.