For those of you who have been able to avoid this particularly weird conspiracy Tommy Robinson is an English white supremacist who was jailed recently for contempt of court.  The Independent has the detail:

Robinson was jailed for committing contempt of court with a Facebook Live video broadcast from outside Leeds Crown Courton 25 May.

The case he was discussing was subject to blanket reporting restrictions imposed under the Contempt of Court Act to ensure that three linked trials did not collapse.

The Section 4 (2) order made it illegal for anyone, in any format, to publish information on the case until the last trial had finished.

Robinson was initially arrested on suspicion of breach of the peace, after heckling people entering Leeds Crown Court and trying to film the defendants.

But prosecutors made the decision to charge him with contempt of court after viewing video evidence and finding that Robinson was subject to a separate suspended sentence.

Robinson, who appeared in court under the name Stephen Christopher Yaxley-Lennon, admitted the crime later the same day and was sentenced to 13 months imprisonment.

Looks straight forward.  He had previous form for contempt.  And he pleaded guilty to the charge.

But this conspiracy theory has developed that he is being held for his political beliefs, not for deliberately attempting to sabotage a trial.

And even the Trump Administration has taken an active interest in Robinson’s fate with news that a senior Trump official complained to the UK Ambassador to the States about the way that Robinson had been treated.

Sam Brownback, the U.S. Ambassador for International Religious Freedom, complained to the British ambassador in Washington D.C. about the treatment of an English right-wing activist who is in jail for disrupting a trial, according to three sources familiar with the discussion.

Brownback raised the case of the activist known as Tommy Robinson in a June meeting with Sir Kim Darroch, Britain’s Ambassador to the United States, according to a British official and two sources close to the organizers of a pro-Robinson demonstration planned for London on Saturday.

Brownback raised the jailing of Robinson during a meeting with Darroch that covered a range of “religious freedom issues”, the British official confirmed earlier this week.

Brownback told Darroch that if Britain did not treat Robinson more sympathetically, the Trump administration might be compelled to criticize Britain’s handling of the case, according to the two sources in contact with organizers of the planned pro-Robinson demonstration.

Brownback has denied the allegation.

Meanwhile Lauren Southern has landed in Australia wearing a tshirt with the words “It’s OK to be white”.  Whoever said it wasn’t? 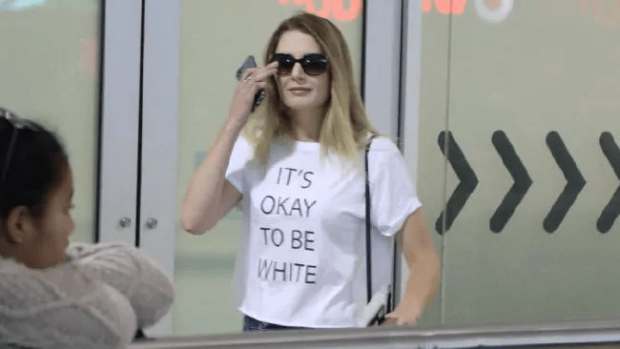