Today is the day the United Kingdom gets back its freedom.

Who from you may ask?  From the European Union?

No that was Brexit and it has happened already.  And it did not turn out the way it was promised.  Read this scathing review from the Observer if you still need to be persuaded.

Today is the day the Government has designated that the people get back their freedom from Covid.

Boris says that since the vaccination rate of those most at risk from the disease are over 90% and since the virus is less dangerous in summer time they should open up now and let it rip.  But this is weird because Boris does not even want to mandate mask wearing.  It is one thing letting everyone go to the pub but mask wearing of itself will slow down the spread of the disease so you would think that a responsible Government would at least keep in place the easy to do things.  After all there is no such thing as a right not to wear a mask.

And when you look at recent infection rates in the UK you have to wnder what planet Boris occupies.  Because there is a surge happening and that is before the effects of the World Cup final have been felt. Admittedly death rates are much lower than they were, so far. 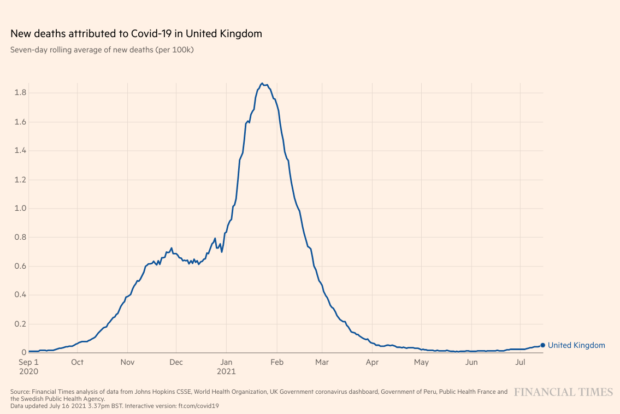 Maybe the vaccine is ensuring that some of those who catch the virus are more resilient.

But the event is descending into pathos.

Because Sajid Javed, the newly appointed Health Minister, has tested positive for Covid, which given the timing of the event and the photo opportunities that Boris is no doubt seeking, is rather unfortunate.  And normally as a close contact of Javed’s, Boris would if he was an ordinary British Citizen be expected to go into isolation.

But there is a new policy just announced that means that Boris will not be treated like any other UK resident.

The British prime minister Boris Johnson and the chancellor Rishi Sunak have been have been contacted by NHS test and trace as contacts of someone who has tested positive for Covid-19, Downing Street said on Sunday.

The announcement follows the news that Sajid Javid, the health secretary, tested positive for the virus on Saturday.

Downing Street said in a statement:

They will be participating in the daily contact testing pilot to allow them to continue to work from Downing Street.

They will be conducting only essential government business during this period.

Scientists throughout the world are agog at what Boris is doing.  From CNBC:

Global scientists have criticized the U.K. government’s plans to ease almost all Covid-19 restrictions, calling it unethical and dangerous for the entire planet.

Gathering at a virtual summit on Friday, leading scientists and government advisors from all over the world warned that Britain was heading for disaster by removing most of its remaining restrictions on Monday.

The event came as more than 1,200 scientists backed a letter to the Lancet medical journal, in which U.K. Prime Minister Boris Johnson’s plans were dubbed “dangerous and premature.”

England will see most of it last remaining restrictions, including mandatory mask-wearing and social distancing, removed on Monday, which Johnson has said will be an “irreversible” move.

Johnson has fiercely defended his new strategy and has argued that now is “the right time to proceed,” before the weather turned colder and as “the natural firebreak of the school holidays” approached.

“It is absolutely vital that we proceed now with caution … we cannot simply revert instantly from Monday to life as it was before Covid,” he said at a press conference Monday.

Even our own Michael Baker thinks the plan is crazy.  From the Guardian:

“In New Zealand we have always looked to the UK for leadership when it comes to scientific expertise, which is why it’s so remarkable that it is not following even basic public health principles,” said Michael Baker, a professor of public health at the University of Otago and a member of the New Zealand ministry of health’s Covid-19 technical advisory group.

I think Boris is trying to create this sort of impression:

But as anyone with any sense will tell you, opening up to an easily spreadable virus that has proved to be fatal to sections of the public and that mutates the more it spreads before you have reached herd immunity is bonkers.

Good luck England.  You will need it.