Those compassionate conservatives of the National Party have a message for the increasing number of homeless who occupy our Brighter Future. Fuck you:

An unofficial inquiry into homelessness has not convinced the Government to take any further steps to tackle the issue.

The inquiry was held by Labour, the Greens, and the Maori Party last year after attempts to have a select committee inquiry were blocked by National.

The parties’ final report in October made a series of recommendations which they said the Government should urgently consider “so that no New Zealanders have to live in garages, in cars, or on the streets”.

The Social Services Committee, which considered the report, said the House should take note of it. But it did not recommend any tangible changes, saying that the Government’s existing work covered many of the recommendations. …

Whatever the government is doing already is clearly not enough. In other news this week:

Homelessness to reach a new crisis point this winter

Emergency housing providers are warning our homelessness is on track to reach a new crisis point this winter with record numbers of families predicted to have nowhere to live.

James Crow from Gimme Shelter is calling on the government to create an effective national strategy to end homelessness, and make it an ongoing priority by creating a dedicated ministerial portfolio. More than 10,000 New Zealanders have signed a petition in support.
…
Crow said New Zealand was way behind in actively planning around homelessness compared to other countries. “We are in a crisis that’s been in the public eye for more than 12 months and little strategy has been shown by the government,” he said. “It’s time to up our game.” …

No No, the government says its already doing enough. No further action is needed. Obviously: 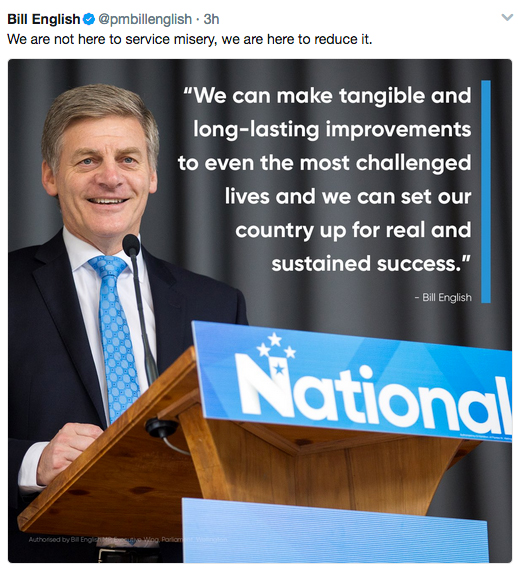 After nine long years that’s the best they’ve got.