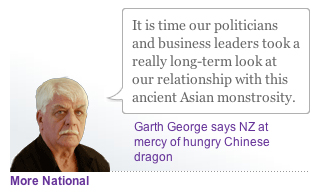 I don’t read Garth George columns. Life’s too short eh? But I could hardly miss this one, with the money quote plastered on the front page of The Herald. George calls China an “ancient Asian monstrosity”.

Now I’m no fan of China’s human rights record, or aspects of its history. But an “ancient Asian monstrosity”? Seriously? And there’s more such drivel in the article itself.

I would have said that George must have been feeling jealous of all the attention that Paul Henry got with his juvenile racist posturing, and was seeking his own martyr’s exile. But no. This wasn’t live to air. This was written, read, edited, and posted. Someone even chose the money quote to feature on the front page. So presumably The Herald endorses George’s views.