I attended the Auckland stop the GCSB Bill meeting last night and I was really impressed.  The turnout was huge.  Mt Albert War Memorial Hall was packed and there was a large number of people outside the hall and in the foyer.

The speakers were very good.  The meeting was chaired by the erudite and witty former High Court Judge Ted Thomas.  Very interesting contributions were made by Dame Anne Salmond, Dr Rodney Harrison, Kim Dotcom himself and Thomas Beagle.  Each of their contributions deserve to be seen in full and you can see the video here.

Some contributions stood out.  Dame Anne Salmond read out this principled and very relevant passage:

Here in New Zealand we often take our democratic freedoms for granted. We think they will always be there. We have a Bill of Rights which is supposed to protect our right to freedom of expression. What on earth could go wrong?

I have a different view. I believe what Thomas Jefferson said – that the price of freedom is eternal vigilance. There are times when we have to stand up for our rights, and the rights of our neighbours and friends, and indeed the rights of people we totally disagree with, or else these rights will begin to erode away.

The passage is from a speech that John Key gave to the Press Club in 2007 about the Electoral Finance Bill.

She also made the wonderful comment that Members of Parliament are sent there to represent us, not rule us.

Dr Rodney Harrison thought that the intent of the bill may have been a desire by the Government to allow the Police and the SIS access to data gathered by Waihopai Base.

Kim Dotcom let a further piece of information drop and it will no doubt cause further discussion and debate although it appears that it may not be new news.  The SIS removed the red flag from his immigration file the day after John Key met a group of Hollywood Moguls.  Was a trap being laid relying on New Zealand’s extradition treaty with the United States?  Expect further revelations soon.

David Cunliffe was put on the spot and asked to state Labour’s position.  He said this:

Sometimes you have issues where you feel your ancestors fluttering around the ceiling, and the Labour party has a proud tradition of taking on evil and iniquitous legislation, whether it’s apartheid, or nuclear weapons, or other things of that nature.

Our leader has committed to a thorough review of this legislation.

And based upon what we have heard tonight, I personally and I’m sure my caucus colleagues, would be of the view that this legislation must not, will not and cannot stand.

Conspiracy theorists are saying that he was undermining David Shearer who was in the hall at the time.  They are wrong.  David Cunliffe was at the hall early and was seated at the front of the room.  David Shearer arrived late and when I left was in the foyer at the back.  Clearly Cunliffe did not see Shearer.

And in related developments the GCSB bill has been reported back with changes including the vaunted insertion of principles underpinning performance of the Bureau’s functions.  The only problem with them, as noted by Idiot Savant, is that they do not impose particular duties on the Director or any employee of the Bureau.  It appears that the principles are “nice to haves” and do not have any legal force.

Tomorrow protests are planned throughout the country.  As John Key said, it is time for us to stand up for our rights. 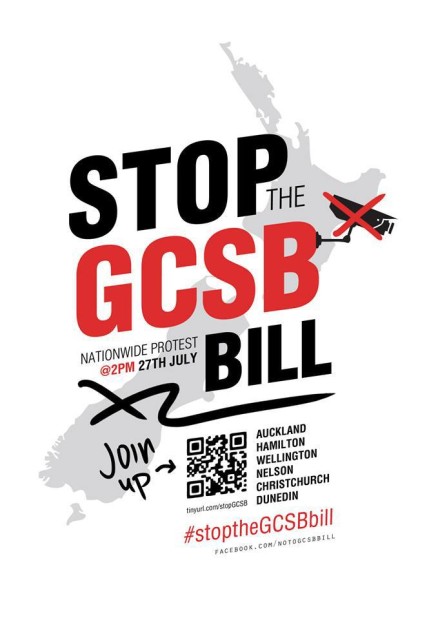