It was standing room only in Auckland last night to hear David Parker, introduced by David Shearer, on Labour’s economic policy. Over 200 people packed the Polish society clubrooms in Morningside, and gave Parker’s ideas a warm reception, with plenty of good questions and answers afterwards.

Parker’s message was very positive. He stated firmly that Labour believes government has levers that it can use to rebuild the economy, a refreshing change from the National’s hands-off “nothing we can do”  mantras. He restated Labour’s goal of full employment, the “key to economic equality”. Labour would use government purchasing to support New Zealand industry – he made particular reference to the ICT sector. Another refreshing change from National’s “Buy cheap overseas crap” policy. Labour, said Parker, is committed to a “living wage.”

You can read the full speech here.

All in all heartening evening. Labour’s organisation in Auckland, with fresh energy imparted by Paul Chalmers and others, is getting into good shape. And there is more to come. As Mike Williams would say, “watch this space.” 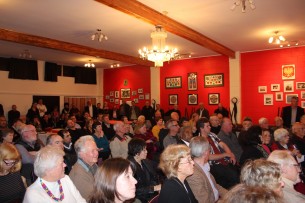