The latest Roy Morgan poll has been released. Already the usual suspects are claiming that it is clear evidence that Labour is doomed and that Andrew Little should be replaced as soon as possible. But to my mind it shows that Roy Morgan needs to review its polling model. Because it is not working.

Below is a graph showing the changes in National and Labour vote this year. The changes are dramatic and very difficult to reconcile with what is happening in reality. The swings this year have been that large that there has to be something amiss with the polling method. 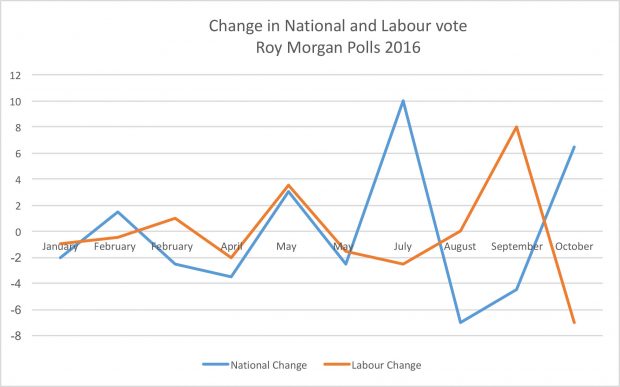 Whether it is the supply of data or the analysis I don’t know. But I am aware that the latest result was originally promised for last Monday, then it was Wednesday but it was not until Friday that it was released.

And the commentary is always so pitiful.

This time apparently it was the highly successful trip to India by Key that caused the upswing. But I bet if you polled the population very few would have been aware that Key had even left the country. And this obsequious piece aside, the trip has achieved exactly precisely nothing. There is no sign of a trade deal with India. And despite the extraordinary circumstances relating to the Sheepgate saga there is no free trade deal with Saudi Arabia either. Putting aside the dubious morality of the transaction the trade deal is no closer to being signed. Can we get our $4.5 million, our model farm and our sheep back?

Meanwhile if you want real life data have a look at the recent local government results. Particularly in Auckland the left was ascendant and the right was in tatters. Hopefully next year will be the same.