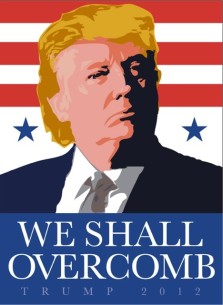 From the party that was willing to put Sarah Palin a heart beat away from the nuclear trigger comes the latest episode of mass insanity.  Donald Trump is polling strongly and could conceivably be the next Republican nominee for the President of the United States.

It is hard to understand why, at least to those of us who are sane.  Because Trump has some very unusual views and there is little evidence that he has the skills you would expect would be needed by the leader of the free world.

His views are, how do I put this politely, simplistic.

He ticks pretty well every Tea Party checklist of desirable Presidential characteristics.  He has said racist and appalling things about Latinos, he is pro gun, pro tax cut for the rich because then we all apparently become rich, fiscally conservative and deeply distrustful of China.

He thinks that Obamacare is an attempt to undermine western civilisation.  In his view ensuring that ordinary people can access health care is destructive of the America he wants to live in.  He said this about Obama’s most important policy success:

His skills are, well he is confident and media savvy.  He forced Barak Obama to release his birth certificate and to the Tea Party this is a significant achievement.  However he has had, for someone who describes himself as a successful businessman, a number of business failures.  And his diplomatic skills are, shall we say, limited?

But he is surging in the polls.  Is the thought of Bush III too much for the Republican Party?

Democrats must be hoping and preying that Trump will succeed and become the Republican Nominee for the Presidential contest.  Because there is no way that he would succeed, the American people are far too savvy to think of trusting him with the levers of power.  Surely …