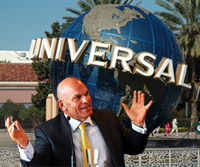 Not content with living in a fantasy world, Rodney Hide had to spend taxpayer money to visit Disney World as well. OK, actually it was Universal Studios but it looks increasingly like Hide’s $50,000 trip kindly paid for by you and me was actually nothing more than a world tour with his girlfriend.

Sure, they stopped off at a few supercities on the way for the purposes of appearances but Hide clearly didn’t pick up any lessons from them because his scheme for Auckland remained unaltered. In fact the point of going to London was really to attend Crome’s borther’s wedding, not to learn about its local government structure. Then there was a quick stop in Toronto to see the prime example of a supercity gone wrong and ignore the lessons first hand. Before the two lovebirds went on to the main attraction – Universial Studios (which seems a strange choice of entertainment for a 51 year old and a 31 year old but I won’t judge).

Like I’ve always said, I don’t have a problem with the spousal travel allowance per se, my problem was that Key had siad ministers shouldn’t use it then turned a blind eye when they did. Now, it looks very much like all of this was just a taxpayer-funded romantic jaunt with a fig-leaf of official buisness. Key will have to announce himself comfortable with it, naturally, he doesn’t have the ability to pull his ministers into line.

A week ago, we mentioned Hone Harawira was AWOL. Our source had the country wrong but, still, partial credit. 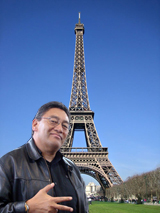 Hone’s press release yesterday was a hilarious send up of the medium, including a section starting “here are your questions” spoofing the slightly sinister habit of governments including Q+As in their press releases on new policies, where they decide not only the answers but the questions too. Still, he doesn’t explain why he skived off to Paris, and neither does the email exchange between Hone and a (now former) supporter read out on Morning Report.

Tariana Turia’s attack on him this morning is slightly surprising. I mean, we all know what Key’s response for one of his own would have been – “I’m comfortable” – whereas Turia really lays into her MP. That’s good but it also raises questions about the relationship between the two (Turia hadn’t talked to Hone before lambasting him in public). Fundamentally, their conflict is about politics not perks – Turia wants power, Hone wants them to remain true to the Maori Party’s principles.

The stain of corruption and misuse of taxpayer dollars just keeps spreading over this government, and the Prime Minister has neither the will nor the power to stop it. Sure, he’ll talk big in the media, but we all know nothing will happen.