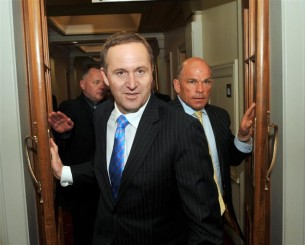 As our msm persist with their increasingly banal fixation on Christchurch’s troubles, I’m reminded of a story that appeared in 2001 not long after the horror of 9/11. It was about a political advisor in the Blair administration who was caught-out doing her job.

On the day of the attacks Jo Moore sent an email to staff advising it was “a very good day to get out anything we want to bury”. Moore’s advice, while thoroughly tasteless, was indeed good PR advice – her mistake was to distribute the advisory as an email. Other than that, it’s a sound and often used technique to release unpalatable or potentially damaging information to the media whenever they’re snowed in with a news-heavy day, just before Christmas, or better yet – when the media are fixated on something they consider so irresistibly newsworthy that it displaces coverage of everything else.

Now I’m sure our principled NACT leaders wouldn’t exploit the suffering of the people of Canterbury for such cynical PR purposes. But I do wonder just what’s being snuck under the radar while our gullible media remain entranced with human interest stories from Quakefest2010.

In particular, I’m more than a little concerned about the major abuses of Standing Orders that are currently occurring with the Select Committee for the State Sector Management Bill – that’s the one that aims to, among other things, merge the National Archive in to Internal Affairs and replace a perfectly good Govt IT platform with a new INCIS II “Superplatform”. Grant Robertson estimates this will save a mere $150,000 net per annum, at the cost of 15 more jobs; if you fire that many people for that little saving, it means the new system will actually cost more to run than the perfectly good one it’s replacing.

Sound a bit dodgey? Well to help make sure this mad plan gets through, NACT have made a few ‘adjustments’ to the usual democratic process for a bill, including: truncating the consultation period, reassigning the Bill to an inappropriate committee – Education and Science (wft!?), and allowing the Committee to proceed while the House is sitting. Here’s the video of Tony Ryall introducing the First Reading and acknowledging the Standing Orders these arrangements breach. This is a major omnibus bill that will affect a lot of fundamental democratic structures, that must be considered widely and carefully, yet our valiant msm watchdogs are all looking the other way.

It may well be that NACT are committing this abuse quite coincidentally, but I can’t help but wonder how convenient the timing is. I also wonder if this need to break so many Standing Orders to grease the Bill means NACT’s rationale for it is shaky too. I understand all OIA requests in to the justification for this Bill have been refused – not something that happens when the facts stack up.

Somehow I just get the feeling there’s going to be a lot of shit hitting the fan with this one.

10 comments on “Govt exploiting CHCH to sneak through abuses? ”