Three of the Herald’s political staff has a crack at trying to explain why National polled 48.5% in the latest Herald-Digipoll. Consensus seems to be that John Key’s an angel sent to earth to do very little but keep enough of the middle class happy enough who’ll never lose. May I humbly suggest an alternative theory – that the Herald-Digipoll is broken.

What the Dimpost poll shows is that:

a) the Herald Digi-poll consistently over measures National – for example, the final Herald poll before the last election had National on 50.9%, that’s outside the margin of error above the 47.3% they got. The final Herald poll in 2008 had National on 47.9%, they got 44.9%. Statistically, the Herald isn’t just missing the bullseye, it’s missing the dartboard altogether. Only the 3news poll is worse. (in the image below, the light blue line is the Herald trend, the dark one is the poll of polls trend). 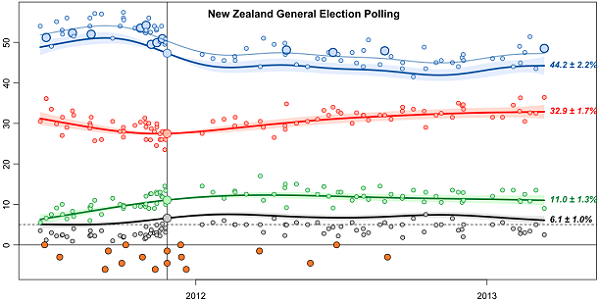 b) even the Herald poll shows that National has lost a significant amount of support. From a pre-election high of 54.2%, a final pre-election number of 50.9%, to 48.5% today. That’s a big drop. Adjust to the Herald’s 3% over-polling of National at the last two elections, and it signals National is at around 45% – in the range that the Dimpost poll of polls has it. Remember, the Right has a one-seat majority in the House. Losing 2-3% since the election, especially when Banks will never get back in, is no laughing matter for National. If it were to translate into an election result, it would mean National would need New Zealand First (or a very large wasted vote) to govern.

c) more regular polls, like the Roy Morgan show a clear downward trend for National. You can’t possibly draw a trend from the five data points in 17 months that the Herald provides because the statistical noise that results in variation between every poll can’t be sensibly separated from the trend when you have so little to work with. The Roy Morgan has polled 29 times in that period and its trend is clear. (incidentally, the Roy Morgan was also the most accurate for National in 2011). 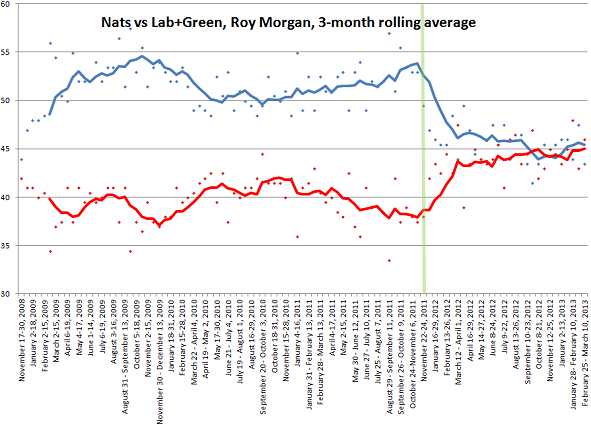 Only if you make all these logical errors (and there’s a strong incentive to do so because our paper spent a lot of money on the poll, which means its going to be treated as gospel no matter what, goddammit), can you then conclude National’s rule continues unblemished thanks to Bonny Prince Grinny.

But when’s a few fallacies ever stopped Granny?

[Note: none of this should be taken as a ‘if these trends continue’ argument. One current accurate polling, the Left needs Winnie too making him Kingmaker and he would have much more incentive to go with National, and there’s the risk of a Shearer campaign meltdown too. Put National at 40% and I’ll be happier].